Worm Wiki
Register
Don't have an account?
Sign In
Advertisement
in: Articles in need of cleanup, Characters, Females,
and 12 more

Queen 18.6
Echidna (pronounced “eh-kid-nah”),[3] formerly known as Noelle Meinhardt, is a powerful being described as a potential Endbringer.[4] She is amazingly destructive, powerful, and hard to stop. With her ability to create clones and extraordinary durability, she qualifies as a Class-S threat, a category that includes the likes of the Endbringers.

Echidna's emotional state is incredibly volatile, heavily influenced by her power and mental issues. She has an adversarial relationship with her body, with her body constantly seeking highly destructive and aggressive combat. While Echidna disliked the prospect of killing, her body had a mind of its own, trying to subvert her by twisting her perception of other people and instilling a killer instinct within her that was difficult to suppress.[5][6] When she gave in to her "other half," she would experience visions, usually based on her memories, while her body took over and rampaged of its own accord until the vision ended. Echidna frequently worried that her body would completely subsume her, leaving her as a passenger in her own body.[7] Later, however, she became more in sync with her body, sympathizing with its anger and viewing the world in a more detached manner.[8]

She has an intense hatred of the Undersiders for killing Coil, who she perceived as being her only hope of becoming normal again and going home to Earth Aleph. This hatred was exacerbated by her body's killer instinct, which led to Echidna developing homicidal feelings toward the Undersiders.[9] Echidna's most notable "human connection" is with Trickster. He is the Traveler most able to control her, and is the main reason the Travelers have not abandoned Echidna.

Echidna's body changes with the amount and type of tissue that she consumes. From her pelvis up, Echidna appears exactly as she originally had as Noelle. Underneath is a mass of flesh from which animal heads, limbs and other assorted body parts protrude. The tissues of her lower half are split between smooth dark green, brown and gray flesh and angry, wrinkled and blistered red flesh.[10]

Prior to her internment in Coil's base, the limbs of her lower half included forelegs ending in a cross between claw and hoof, a set of tentacles (with assorted exoskeletons) that were able to support her weight, and a gigantic arm and hand with another limb sprouting from the palm. Lower-body heads included a horse-sized half-bovine and half-canine head and a half-sprouted head. These features would further develop and change before the combined hero and villain forces fought her.[10] Echidna could shift her body like fluid, pushing her flesh and organs through rubble and dissolving her own bones when necessary.[11]

Echidna consumes tissue and 'evolves' body parts, varying from wolf-like heads to legs. When she comes into contact with a lifeform, she will vomit a clone of it that is stronger and more violent than the original. If she maintains contact with the original, she can produce clones of them at will. If she clones a parahuman, the clone will possess either a stronger or modified version of the original's powers.[12]

Echidna's clones are usually physically tougher than the original, resistant to pain and injury. They vary based on how long she spent creating them - clones that are produced too rapidly are fragile, half-formed and missing body parts, while clones that are held inside too long are heavily mutated to the point of having difficulty moving.[13] Even the most human-looking clones are visibly different from the original.

Echidna can also create hostile versions of rats, insects, spiders, and other organisms that she absorbs, and can mutate fungi and bacteria into a form that temporarily debilitates anyone she captures.[14] Anyone Echidna touches is absorbed and, if a parahuman, has their powers suppressed.[15] Anyone ingested also experiences vivid hallucinations based on the worst moments of their lives.

Tattletale considers Echidna to be as physically strong as Leviathan, though not as durable.[16] She is able to move quite fast despite her size, with powerful legs that carry her body. While seemingly indestructible due to her quick regeneration, she can be damaged and killed. Echidna has a core in her lower body, and anything cut away from this core will deteriorate and die. Anything left attached to the core will rapidly regenerate. If Echidna's core is destroyed, the rest of her is destroyed as well.[17]

Echidna has a thinker ability that interprets parahumans through "smell." She can smell across the city, meaning it can serve as a powerful tracking aid, and can help to identify the powers parahumans have to facilitate planning the creation of clones. She can rank parahumans by "intensity" of smell and identify untriggered parahumans. Through this, she can recognize parahumans with altered shard connections, such as those with a double trigger, second trigger, or an otherwise complex shard relationship.[18]

It is likely that Echidna's power was affected by the fact that Echidna was administered only half of a dose of a Cauldron vial; her unstable temperament and monstrous lower body were probably not in the intended spectrum of effects. Oliver, who drank the other half of the dose, may have received the portion of the power intended to moderate and control these effects.

Echidna is the codename of Noelle Meinhardt, a member of the nomadic villain group known as the Travelers, who were dimensionally displaced from Earth Aleph after being transported into Earth Bet during the Simurgh's attack on Madison.

Noelle and the rest of her group found and drank several Cauldron vials that they found in a briefcase, granting each of them powers. However, Noelle and Oliver split one of the vials, each of them drinking half. As a result, they received what are believed to be two halves of the same power - Oliver gained a power that adjusted his appearance to the local standard of attractiveness, and Noelle slowly became the monster that would later be known as Echidna.

Noelle was the main cause of the Travelers' nomadic lifestyle due to her occasional rage states and clones that resulted in dozens of deaths. They arrived in Brockton Bay after fleeing from Boston, enticed by Coil's promise to find a way to cure Noelle. Noelle was kept in a secure room underground in Coil's base, far away from other people, but could communicate via a microphone and loudspeaker installed in her room.

When the Slaughterhouse Nine came to Brockton Bay, Crawler's choice of nomination was Noelle, likely in hopes of finding a foe powerful enough to injure him. He visited Coil's base, to the vault where Noelle was being kept, but was unable to penetrate the thick metal doors due to Coil's foresight. After a period of frustration, Crawler eventually left.

After the Undersiders found out that Coil had betrayed them, the Undersiders managed to best Coil despite his best efforts. In the final standoff, Coil was killed by Skitter. As his final act of spite, however, Coil made sure that Noelle heard his death over the phone. Her last hope of being cured gone, Noelle broke out of her cell and set out to kill the Undersiders for what they had done.[19]

After escaping from her cell, Noelle tracked down and kidnapped Vista, making multiple clones of her.[20] Accompanied by her clones of Vista, Noelle began a webcam call with the Brockton Bay Protectorate, lying about killing Vista and giving them an ultimatum of either killing the Undersiders or giving them to her. After the conversation, the PRT rated Noelle as an A-Class threat despite Tattletale's efforts to persuade them to make it S-Class.[21]

Noelle then began rapidly moving across the city, facilitated by her Vista clones, in order to track down, capture, and clone Über, Leet, and Circus. She deployed several of her Vista clones across the city in order to distract and slow down the capes mobilizing against her.[22] Eventually, she was confronted by Eidolon, who tried to reason with her at first, likely promising to try to find a way to cure her. However, Noelle was aware that her mind was too far gone, rewired for aggression. She used one of her Vista clones to reveal an ambush against Eidolon, employing multiple clones of Über, Leet, and Circus.

After Noelle was rated as a threat, a PRT member suggested the name "Echidna" for Noelle because he had a daughter with the same name and didn't want to associate the name with the monstrous equivalent. It is implied that this PRT member is the Earth Bet version of Noelle's father, as they share the last name Meinhardt.[23]

Echidna was finally killed by her former friend Sundancer, who incinerated her and several capes still trapped inside of Echidna at the time.[24] 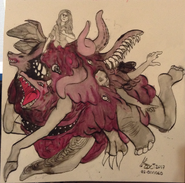 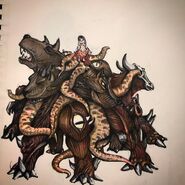 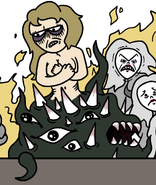