Ward, Interlude 3 II
Dot was the daughter of Polka, one of Nilbog's favorite creations.

Dot was one of the King Rinke creatures that could speak English.[1] Her voice is high pitched, likely due to her small size.[2] She is a kitten-sized, and has a similar temperament[3] - she naps constantly, but when awake is very active.[4]

She essentially worshiped King Rinke, as did all his children, loving the very idea of interacting with him, and willing to sacrifice everything to help him lead her people again.[5] However, when he refused to help her and ordered her to return to her people bringing a philanthropic message, she was heartbroken and made no move to do so.

Dot liked bright colors;[2] heavily disliking the drab appearance of the abandoned Earth Bet.[6] She used brightly-colored children's bandages "for luck",[7] and she diligently pieced together her outfits from brightly-colored dolls' clothes.[7] She was proud of her red spots.[1][7] Her own biology and socialization has given her a very different metric for the terrific and terrifying.[1] She enjoyed humans that had been mutated by powers or grown old, which she felt were more "beautiful" and "interesting".[8][9]

She had a somewhat fairy-tale mentality, often comparing things to stories King Rinke used to read to them.[10][11] One hold over from this she referred to people by titles, claimed and unclaimed.[2] As well as seeing things from the antiquated Monarch-Vassal perspective.[12]

Her loyalty is strong enough to override her usual single mindedness,[13] and summun inhuman amounts of patience.[14]

Dot worshiped her King just like many of her fellow goblins.[15] After he rejected her help she came to see him as the broken man he was.[16][17]

She does not care much about human lives, and had no problem eating humans, but loved the other King Rinke creations in her group as family.[18]

First coming to her as a fellow traveler nursing hurt,[19] Dot came to view Amy as her new liege, if not friend.[2][20] She had several discussions with Amy about wide ranging subjects, from Amy taking her station more seriously to having Amy make her a bespoke boyfriend.[21]

Was respectful to her queen's sister.

Was the daughter of Polka the fourth, who as with the others had been made in the image of King Rinke's favorite creation.[22] Like her 'mother' Dot was tiny, perhaps the size of a human head, able to easily hide on shelves.[7][23][24] She had short pale yellow fur on her skin with red spots.[25] [26] She had a prehensile tail with a tuft of red fur on the end. [26] Her hands and feet were clawed,[27][28] and she had an opposable toe on each foot.[29]

She had a large, expressive mouth[26][30] that could open so wide that the teeth on the bottom and top both pointed straight forward.[31] Her ears were large and batlike, and quite mobile, able to point in different directions. They had tufts of red hair on the ends.[26][32][33] She had red hair,[26][34] long enough to cover her neck.[35] She had a long tongue that she would use to pick her nose or clean herself.[7][18]

She dressed in colorful doll's clothes[7] including fingerless gloves.[36] In Amy Dallon's service she donned an exquisite outfit Amy had made her; a black pinafore-style dress with brightly coloured decorations and ruffles, brightly-striped socks and gloves, and a ribbon on her tail.[27]

Given her small size Dot is small, quick and agile,[7] and has had the time to learn how to use these traits.[14] She is highly resistant to damage and can deal with pain. Strong enough to successfully fight several rats the size of small dogs,[11] with experience surviving against the Machine Army.[14] Her years of living in the ruins of Earth Bet has given her several survival skills, including reconnaissance,[14] and honed instincts on how to deal with threats.[20]

She carried a small bag with her to carry food, tools and other supplies.[7] The only real weapon she carries is a box cutter she appropriated.[7][20]

Was living in Rinke's Kingdom when the guests arrived, some guests took her king away, which excited her community, which made Ellisburg Riot.

Dot lived on Earth Bet, scavenging, the leader and scout of a dwindling band of King Rinke's children.[14] When she learned of her King's location, she set out on a quest to free him. But when she made it to him, he refused.

Heartbroken, Dot briefly contemplated making it her mission to destroy humanity, before she was taken in by Panacea. Who was also dealing with family who did not 'want' her.

At an unknown time Amy, or as Dot would call her, The Red Queen, healed several of Nilbog's creations.[2]

Accompanied Panacea during the Goddess debacle.[39] Dot tried to talk to a very colorful person but the conversation did not go well.[2]

When Amy left heartbroken from her sisters rejection Dot was with her when Lab Rat visited.[20]

When Amy declared herself as the new presumptive ruler of Earth Shin and departed for said world Dot was by her side.[40]

Dot watched Amy do several adjustments and healings, some of particular note was when she gave a person more ears then he wanted, returned an old man to youth, and accidentally mutilated Hunter.[41]

After Teacher releasing private data about capes sparked the Shin Diplomatic Crisis Dot sat in on the early discussions by occupying Amy's hoodie, she gave what was probably a welcoming smile to the Red Queen's adopted sister.[42]

After Victoria was hurt following Breakthrough;s imprisonment, Dot was tranquilized by Amy so she could have a private moment with her sister.[3] Dot later woke up and shared significant contributed to the two sisters discussions.[43][44]

Dot was with her Queen and the royal entourage as her royal highness embarked on a new project.[45][46]

A few days after this Dot met Engel.[47] 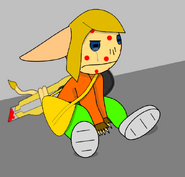 Dot in Shin, Illustration by Grmpumkin 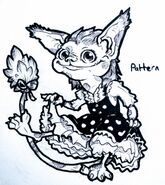