Edit
watch 01:25
Jurassic World: Dominion Dominates Fandom Wikis - The Loop
Do you like this video?
Play Sound
This article is about the original. You may be looking for the successor or the other successor.

Ashley Stillons,[1] known publicly as Damsel of Distress, was a former independent villain and later member of the Slaughterhouse Nine originally operating from Stafford, New Hampshire.

Years of living on the streets with inconsistent nutrition[7] left Ashley painfully thin to the point of looking emaciated.[1] This, combined with being taller than average, led to some people thinking she looks boyish.[8] She had long, usually unkempt 'platinum blonde' hair[9] and pale blue eyes.[10] By throwing on some civilian clothes and a hat and keeping her head down, she could almost pass as a boy.

As Damsel of Distress, Ashley usually wore black gowns of varying quality with different combinations of masks and black lipstick,[1] Once she decorated her waist with twists of wire.[11] This, combined with her pallor and gaunt appearance, made her both appealing and intimidating. Using her power commonly causes her eyes to turn white, occluding her pupils and irises but not affecting her sight.[12]

She collected rare fragments of material that survived the application of her power. Ashley used these as elements of her metal mask and pseudo knives.[11]

Following Bonesaw's modifications to her forearms and hands, her arms are twice as long as before, with long drawn out fingers that had mechanisms crammed inside of them and blades at the ends, allowing Damsel to have perfect control of her power, including recoil.[13][14]

Ashley is considered mentally unbalanced,[6] driven to establish her superiority by her passenger.[15] She is fond of delivering dramatic monologues for the euphoric effect of becoming less pressured by her passenger.[7] She made a point to design her persona after character that would deliver such monologues.[16]

Through a combination of childhood trauma and the early activation of her passenger, she became excessively ambitious, narcissistic, megalomaniac, and paranoid. Her passenger punished her when she did not succeed, perpetuating long strings of near-misses. The reality of a 'camp' villain willing to murder hostages or blame others for her problems, combined with her drawbacks, made her both scary and pitiable.[17]

Her power was somewhat uncontrolled, spiking or going on the fritz when she got stressed or anxious.[9] Coupled with her obsessive personality, this meant that she would get caught in vicious cycles where she became frustrated and anxious at eating or similar activities after destroying one meal, losing sleep or shelter, embarrassing herself in front of others, or similar situations.[7] In stubbornness and pride, she would consequently go long stretches of time without really eating or sleeping.[17][18] She was fond of situations where she could use hostages or stalk a target through a cluttered area, where she could blast through cover and potentially her victim.[17]

Bonesaw's surgical alterations simultaneously broke her pride and gave her control. This was a cold, ruthless, detached source of obliteration, "deserving and giving no pity".[17][7]

From her time in Boston she gained a scary reputation. Everyone in the know in the north-west kept an eye on her, including people like Defiant.[5]

Ashley creates maelstroms of inconsistent gravity and spacetime warping,[5] chaotically twisting reality[7] in uncontrolled cone-shaped blasts[7][19] that severely alters anything in its path.[17] The "blasts" can rip, tear, twist, melt, disintegrate, and cause numerous other effects to organic and inorganic matter within a variable range of four[18] to fifteen feet.[1][17] As such this power is capable of destroying virtually any matter or construction,[20] including the likes of Alexandria, as Ashley's 'shotgun' bursts ignore most forms of durability.[17] These annihilation blasts also create a horrible earsplitting noise,[21] announcing her wherever she goes,[22] and a strange visual element when seen full on.[23]

Additionally Ashley's power also has a forceful kickback that flings her backwards, as the combination of warped space, disintegration and gravity shearing makes for a massive amount of recoil whenever she activates her power.[19][17][7] Ashley eventually learned to use this effect to move at high speeds in ten- to fifteen-foot bursts, allowing her to avoid attacks[1] and giving her a Mover rating.[19]

Ashley's power is extremely potent, of the same class as Scrub and close to Flechette's.[17] Yet she never had full control of it[7], being unable to prevent herself from producing minor flare-ups whenever she became stressed or anxious.[17] Bonesaw's alterations gave Ashley the ability to control her power, along with added range,[18] at the cost of her becoming even more of a monster.[17][7][9]

The use of her power was never the same twice but some gestures and movements generally had the same result.[24]

Under lucky circumstances her power is able to produce highly compressed pieces of matter, usually that happens with metal blocks of decent size. Ashley had a habit of keeping those as mementos or power-resistant utilities.[25] Their radioactivity is not specified.

Completely removing her forearms affects her ability to use her power.[26]

Thanks to the safeguards inherent in shards; Ashley is protected against her power. Although it is less permissive about her hair and clothing, than usual. First using her power turned her hair white,[27], with repeated uses easily removing dyes and similar.[12][28] It can also be used as an impromptu cleansing.[12]

Ashley triggered in 2004, at 13 years old, when she tried to save her mother from being beaten to death by her enraged father and was backed into a corner, surrounded by chaos. With her new uncontrolled power, she killed her father and, accidentally while checking on her, her mother. Her trigger event affected her emotionally on a fundamental level, and she fled her former home with whatever she could carry and not accidentally obliterate.[29][3]

Ashley spent years of her life on the streets trying to make it into the cape scene in a large city like Boston, but she lacked the ability to see those dreams through and failed to do so multiple times.[29][17]

At the start of Boston Blowback Damsel, age 16[30], was laying relatively low in the small town of Stafford, New Hampshire, where she was observed, annoyed and taken care by Edict and Licit, the only other parahumans in the town, stationed there specifically for that purpose by Director Armstrong.[3][31]

Once rumors about Boston situation reached her, she immediately headed there and tried to carve a piece of the underworld for herself.

During the first three weeks of Boston Games Damsel was enjoying her relative successes. However, once Accord plans truly kicked-in in her region, she was left reeling and defeated. In that moment she turned to earlier PRT offer and Director Armstrong made clear his desire to recruit her. Unfortunately, he made a mistake that pushed Damsel into tantrum of paranoid rage. She flees the city, feeling lesser than before.[32]

Eventually Damsel of Distress retreated back into Stafford. She holed up in a warehouse between her periodic trips into other cites. She had her amenities paid for by the PRT, something she paid no attention.[6][5]

At this point Licit and Edict mostly leave her alone, and do not seek face-to-face interaction.[14]

When they left Brockton Bay, the remaining members of the Slaughterhouse Nine went to recruit her. Despite being reluctant and covertly antagonistic, she was manipulated into joining. As compromise, Nine offered her an opportunity to act-out a festering grudge.[14]

As Ashley correctly suspected, Bonesaw converted her into one of her "toys" by taking out her ability to speak and further weaponizing her arms, while keeping them as inconvenient as before.[14]

With these newly upgraded powers, Damsel was able to easily cut her way through Accord mansion and two of his Ambassadors.[14][8] In her confrontation with Blasto, Defiant killed his fellow cyborg, blinding the villainess with a swipe of his halberd and then bisecting her using nano-thorns he installed in his own artificial limbs, disintegrating her head and shoulder.[33][20]

During the several months that Bonesaw spent trying to clone members of the Slaughterhouse Nine, she made several attempts with Damsel, including a version of her that had triggered far too young to be of much use.[10]

Seven of these clones died ranting and raving in the best style of their predecessor.[35] Two of the remaining Damsels were forced to surrender.[14]

Two surviving instances of Damsel were located when Khepri took control of the remaining parahumans in an attempt to end Gold Morning.[36]

Someone else named Ashley was seen in The City built on the other side of Armageddon.

Illustration by saniika on deviantart

Image by ridtom on DeviantArt. 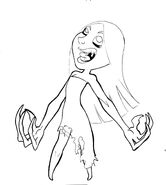