Formally, Norfair span of the City

Crystalclear is an absent-minded Thinker attempting to make a new life for himself, along with uncountable others.[3]

He can mis-read social situations and talk unnecessarily.[5]

Crystalclear has shards of what appear to be glass or crystal jutting from his elbows, hands and face. Their appearance is described as somewhat beautiful. The chunks of crystal made up his entire upper face,[6] replacing his nose, eyes, brow and scalp.[7] The crystals were embedded deep enough that they should have penetrated his brain. He would sometimes pull the crystals out of his head.[8] He can remove the crystals from his head, enough to reveal his blue eyes.[9] As such he does not have the same crystal configuration day to day.[10]

In his first "costume", he wore a deep purple tank-top,[6] in keeping with the superhero-civilian wear aesthetic that his team used. After joining Foresight he wore the more individualized-armored-tunic-uniform that they did.[11]

Crystaclear has a blaster power that can travel through terrain.[1] He would throw chunks of crystal that passed seamlessly through walls and the ground, then exploded out in a small detonation of gas, debris and crystalline fragments. The crystals seemingly homed in on their targets; for example, a crystal thrown into the ground would re-emerge beneath the target.[12]

Crystalclear saw through solid objects as if they were made of glass or transparent crystal,[1] with edges and corners catching the light.[13] Unmoving objects looked white-edged, while moving objects (such as people) looked blurred and diffracted, their white-edged present selves surrounded by red images of their past and blue images of their future.[14] Humans were also surrounded by distortions in the light that represented their focus and emotions, with dramatic changes in focus resembling fractures in the crystal.[15]

He could see other colors beyond the red past and the blue future. Greens were also present.[16] He could shape the crystals he grows, and they do not interfere with brain function.[17]

He was kidnapped as a child and raised by the kidnapper, he was also a deliverer of drugs for the kidnapper who presumably needed someone young enough to deliver packages unnoticed. He was raised not to ask questions. When he was finally caught on a delivery, now old enough to attract notice, he couldn't tell to the arresting authorities anything that could have lessened his culpability. Finding out the full scope of what happened to him faced with hostility from everyone including the now revealed kidnapper caused him to trigger.[18]

Joined a superhero team and had a bad first day.

With his future sight he saw trouble and he alerted Tempera, who made the decision to call for assistance.

After the team fell apart, he received an offer from Foresight,[5] which he accepted.[3]

Stood guard over the meeting with Earth Cheit diplomats and was then debriefed by Weld.

Helped stop a device that weaponizes portals from going off.[19]

Got assigned in parahuman prison camp as an undercover agent.[20]

Assisted Breakthrough with the Goddess situation, and was himself mastered by her.

He and his team accompanied Breakthrough on their investigation of the Navigators' ambush. At the end of the another ambush he apprehended the enemy teleporter.[21] 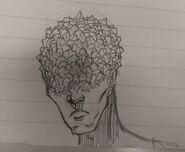 Crystalclear sketch by somnolentSleep on Discord

Titan Crystalman
Add a photo to this gallery

Retrieved from "https://worm.fandom.com/wiki/Crystalclear?oldid=55121"
Community content is available under CC-BY-SA unless otherwise noted.