Interlude 25 (mentioned)
Sting 26.2
Crimson was one of the founding members of the Slaughterhouse Nine.

While using his power, Crimson was described as "big, muscular with a six pack, fueled by rage and impulse."[1] His flesh would be engorged, purple-red, the veins would be standing out.[2] He was six feet tall.[2] His tongue was so bloated it impeded his speech.[3] His feet were large.[4]

On at least one occasion, he was seen wielding a six-foot-long sword.[2]

Crimson powers up by consuming the blood of multiple victims. After witnessing Crimson bulking up, Weaver refers to his power as, "...a little bit of a vampire [schtick], but the end result was more Mr. Hyde."[1] According to Weaver, he was "as hard as iron, strong" after feeding.[2]

Crimson's strength made him agile, able to rapidly climb buildings[5] and leap from rooftop to rooftop.[6] He was strong and fast enough to plow through a wall.[7] He was able to break free of Golem's asphalt arms, and destroy new ones faster than they could be created.[5] He could stab his sword deep into a brick wall.[6] However, Wanton was able to entangle him using spider silk.[8]

He was heavy when using his power, which sometimes caused him difficulty finding supports strong enough to take his weight.[4][5]

Crimson was largely immune to conventional munitions.[9] He was unphased by a fall of more than three stories,[5] although Weaver believed it would still hurt him somewhat.[10] His skin could be cut by blades[2] or caltrops and hooks, but he seemed not to care.[8] Weaver believed that a strike to the back of his knee would still cause him pain despite his durability.[11]

In addition to his relationship with Winter, their powers worked quite well together. According to Weaver, Winter would use her aura to capture victims for Crimson to feed on, at which time he would take to the front lines and draw fire from her, allowing her to support from range and negating the worry of friendly fire as he would be immune to her munitions.[9]

Crimson was one of the founding members of the Slaughterhouse Nine.[12]

Crimson and Winter were lovers, though the duration of this relationship is unknown as Bonesaw refers the couple's time together as "brief", since Crimson died shortly after. When cloning the pair, Bonesaw took the time to encode the relationship into their clones, but whether this is an indicator of how strong the relationship was or if Bonesaw was simply caricaturing them based on her limited knowledge is unknown.[13]

Ten clones of Crimson were created by Bonesaw as part of the Slaughterhouse 9000.[12]

One Crimson participated, and died, in the Battle at Schenectady.

Multiple Crimsons were present at the Slaughterhouse fight in Los Angeles.[14] At least one was killed by Foil.[15] 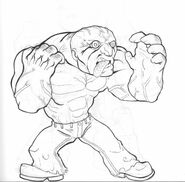