Worm Wiki
Register
Don't have an account?
Sign In
Advertisement
in: Articles in need of cleanup, Males, Strikers,
and 8 more

Heavens 12.none (Flashback)
Interlude 15.z II
Dennis, widely known as the young hero Clockblocker, is a member of the Brockton Bay Wards.

Dennis likes to joke about everything, deliberately choosing an offensive cape-name because he found it funny.[3] Given his father having a life threatening illness for much of his life, he may have used this as a coping mechanism.

Clockblocker has had a tendency to be willing to work alongside the "villains", going so far as showing some kind of fondness for Skitter. However, he never crossed the line into being a villain. He does help Skitter cut Echidna in half using a frozen piece of spider silk.

Clockblocker is observant and understands the social and political implications the revelations of the The Triumvirate's actions on the Protectorate as well as the utter wreckage it would have on the team dynamic of the Protectorate teams.[4]

Clockblocker has become jaded by his experiences. And was far more sarcastic and acerbic than he used to be.[5]

Dennis suffers something like a personality inversion, caused by his resurrection.[6]

Vista was his teammate and friend on the Wards. The two shared a useful team dynamic and were able to use their powers effectively together.

Dennis is Caucasian with red hair, blue eyes and about average height.

Clockblocker wore a skintight white costume,[7] with panels of glossy white armoring placed strategically to not inhibit his movement. It covered every inch of his skin. The armor had grey clocks inscribed on it; the ones at his shoulder, the center of his chest, and the backs of his hands - the places the armor was broadest - had hands that moved at different speeds[8] using digital displays.[9]

His helmet was a faceless, smooth expanse of white.[7][8] By the time he was a member of the Protectorate, his mask featured an animated clock over the face.[9]

After the resurrection he has breaker-like alterations to his body, including rigid hair, that does not allow him to wear fitted helmets anymore. He has added Valkyrie's wings on his chest emblem.[10]

Clockblocker could "tag" nearly anything, freezing it in time.[2] This power could affect living creatures,[8] including humans, as well as inanimate objects.[11][12] It could not affect him.[13]

Targets were stuck in the air, immobile, but weren't harmed.[8] They were immune to conventional attacks.[12] He described the effect as being "inviolable", according to "the doctors", and claimed that he would sooner expect Siberian to "fold the universe in half" than break something he froze.[14] Thin objects could be extremely sharp, threatening enemies who moved into them.[11][12]

Clockblocker could freeze something within a fraction of a second of it making contact,[8] whether it be his hands, feet,[15] or any part of his body. He could freeze only the bugs that were in contact with a section of his body, or everything in contact with him at once.[16] He was able to tag Leviathan without being injured, though it did cause him to almost drown in the water he was in.[17]

Clockblocker couldn't disable the effects of his power.[8] Objects remained frozen for a period between 30 seconds and 10 minutes, with no control over the time limit. His powers remained comparatively static throughout the story-line.

His power worked through interconnected objects, but it had a limited range. Like many parahumans, his power's strength varied based on his mental state. He was just barely able to push it through the thread binding Echidna and Ignis Fatuus, noting that his power must have been "working at peak efficiency" at the time.[18]

His costume included a utility belt, which included, among other things, flashbangs[19] and paper. Which he could freeze to create barriers or "steps" in midair.[11]

Later in his career, he would incorporate more equipment into his suit as he found more creative ways to use his powers. Mainly a gauntlet with propelled finger projectiles,[20] and a rapidly deployable tent built into his backpack.[21]

Dennis triggered when he was 15. While donating bone marrow to his father to help with his condition, the stress of the situation gave him his powers.[1] The needle that was about to be inserted into his bones when extracting marrow was what shaped his powers into a striker ability,[22] being able to pause time as his fathers' was rapidly running out.[23]

Got into a compromising position during the Battle at the Bank when he panicked and froze some of Skitter's swarm, accidentally pinning himself in place.

He and Vista were able to stop Bakuda's final bomb.[24]

Dennis' father was dying of cancer, previous medical treatments being ineffective, but he asked Panacea and Glory Girl for a favor in curing his father of cancer, which they gave him.[25]

Was a major part of Piggot's plan to take out the Nine.

Was later instrumental again in turning the tide in the fight against Echidna. Had a discussion with Skitter over fallout over the secrets that were revealed during the battle.

Was involved in the revelations concerning Skitters identity at Arcadia High.

Had graduated into the protectorate in the two years since. He did not see much of a future as a hero.[26] When The Slaughterhouse Nine-Thousand emerged Weaver asked that he be placed in command of the Brockton Bay Wards team.[27]

Clockblocker died during the battle against Scion before Glaistig Uaine claimed him, using his abilities to fight the mad Worm.

Valkyrie speculates that she may be able to resurrect her ghosts in some form by merging them with Nilbog's creations.[28] A figure that may be Clockblocker, a young man with red hair wearing a white bodysuit, later appears alongside her,[29][30] making him one of the earliest of of the returned.

Regardless, two years later Clockblocker was seen with Valkyrie as a member of her Flock.

During the initial fight with The Simurgh, together with Vista and Capricorn Blue, attempted to anchor and freeze The Endbringer.[32] Later, inside the The Wardens' HQ he succeeds in that with Sveta's help.[33]

Illustration by nethernity on deviantart 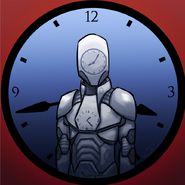 Art by TheKrustacean on DeviantArt 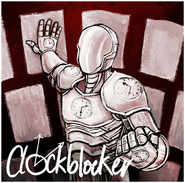 Image by Lonsheep on DeviantArt.

Clockblocker with Vista and the PRT by Lonsheep on DeviantArt. 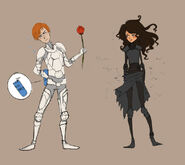