Mayor of the City
CEO of Mortari corporation
Secretary (previously)

Interlude 2 II
Jeanne Wynn (born Jean Brown), known publicly as Citrine, is a member of the Ambassadors, and eventually the mayor of the City of Bet refugees, as well as the leader of Mortari.

Jeanne is a young, blonde woman. She wears a goldenrod yellow evening gown with a gemstone studded masquerade ball mask, showcasing her lower face with matching yellow lipstick.[1] Her mask was yellow as well, and Taylor recognized the gems studding it as her namesake gemstone - citrines.[2][3]

Multiple characters have noted that she is physically attractive, including Accord and Skitter.[2][4] She dedicated an hour every morning to caring for her skin, another hour to her hair, which was "immaculately styled".

When deployed to New Delhi she is explicitly referenced as having thrown off her elaborate gown costume for a more practical bodysuit. Implicitly for ease of movement.[5]

Accord referred to her as his "best Ambassador".[4] Taylor suspected that she had a similar personality to Grue - they were both "professionals".[2] Citrine led the Ambassadors in battle, even when her power was ineffectual.[6]

She assessed the Undersiders as a threat based on their track record, disagreeing - politely - with Othello.[4]

Taylor believed that she was not Grue's "type". Nevertheless, it bothered her that she did not feel jealous of the time he spent with her.[2] It was implied in his interlude that she was attracted to Accord.[4]

All these combined made her marriage to Kurt one of equals.[7]

She can interfere with gravity, temperature variation, friction, light intensity, and the progression of time, among others.[9] She claimed that there were "more possibilities than I could count, many so minor you wouldn't notice."[2] She could use her power to make everything within her ability's range effectively waterproof as an example.[10]

Most notably, Citrine can "find the right attunement, as though I were searching a radio station" to neutralize a given parahuman's abilities. Furthermore, she can specifically cancel out protective powers, or cause powers to go out of control. This latter effect never takes more than twenty or thirty seconds.[2] She risked striking the wrong attunement and accidentally killing her target.[9][6] Further, some powers are too subtle to find out in time before she is retaliated against, or have the subject step out of her range.[8]

Citrine's power gives everything in its area of effect a washed out yellow effect as if the observer was colorblind, only able to see yellow.[10] Under the influence of the Yàngbǎn, it appeared as a golden glow.[11]

Despite being from a privileged family, she had grown up violent and 'uncivilized'. During her last year in a juvenile detention center, before her transfer to an adult’s prison, she received an offer that she could not afford to refuse.[12]

When talking about the type of people who sought out Accord, she implied she was the type that had power and sought more.[13]

Under Accord, she helped to watch Blasto in his lab,[14] and was one of only two known Ambassadors to survive the raid by the Slaughterhouse Nine.

She accompanied Accord to a neutral meeting of all the villains in Brockton Bay[4]. Afterwards, she agreed with Othello's assessment that the Ambassadors could deal with any individual group but not more.

Accord sent her to inform the Undersiders leadership that the Ambassadors would be "recruiting" five new parahumans - by which she meant purchasing five vials from Cauldron for Accord's five highest unpowered lieutenants. She admitted that she was also a Cauldron cape.[2]

She led the Ambassadors alongside the Undersiders against the Teeth.[6]

During the battle with Behemoth, she helped suppress his sonic attack[11]. This extended to several other effects the dynokinetic monster used against the defending forces. She was not able to counter all of the Endbringer's attacks however and eventually had to withdraw from the battle, due to exhaustion.

She still leads the Ambassadors and had begun a relationship with The Number Man.

Jeanne Wynn was elected mayor of The City. She and her husband worked to keep things in check.

Breakthrough agreed to work with her.

Once Cradle tried to leave Earth N through a reactivated portal he ran headlong into Citrine and Number Man leading a crowd of parahumans. Citrine nullified Cradle's mover abilities and expressed the desire to proceed with his kill order, but Antares suggested to keep him alive as a precaution.[16]

Citrine had granted some degree of autonomy to Bluestocking and villains of Earth N as was promised by Breakthrough.

She was outed as a parahuman by Gary Nieves.[17] In ensuing diplomatic conflict with Earth Shin Citrine and her husband were called in to recover Breakthrough from Earth Shin custody.[18]

Citrine was leading the assembly of the second assault team deploying against Teacher. She presented her own parahuman team, created from the recovered vials.[19]

Jeanne and Kurt were caught in a car bombing blamed on anti-parahuman faction.[20] Jeanne survived it. She accepted Contessa as a political consultant.[21]

She was present in the Wardens' situation room during The Second Shin Crisis[22] and Ice Breaking. She was noticeably shocked, seeing as her work of recent years collapses around her.[23]

Image by Pabel and Nine on tumblr 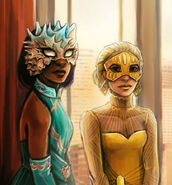 Citrine with Ligeia by Lonsheep