Insinuation 2.6 (Mentioned)
Tangle 6.7
Circus is an independent villain[3][4][5] in Brockton Bay, and a classic example of a Grab-Bag Cape.

Circus appears to be a man while in civilian clothes, and an older teen/early-twenties girl while in costume.[6][7][4]

Circus' costume, makeup, and color scheme were different every time they went out, but the theme was always more or less the same.[4] On one occasion, they wore a costume and makeup of red and gold.[8] On another, they wore clown makeup and a jester’s cap, with a teal and orange skintight costume complete with coattails, and bells jangling from the tips of their cap, their coattails, their gloves and boots.[4]

Circus is described as a genderfluid cross-dresser by Wildbow.[1] This made it impossible for Tattletale to determine whether they were "a guy posing as a girl when in costume or a girl who poses as a guy when in plainclothes,"[7] because both suppositions were essentially correct.[1]

Circus' identity was further complicated by their trigger event, a multitrigger that involved facets linked to male and female personalities. As a result, Circus can reflect slightly different body language and skillsets between their civilian and cape identities. This might best be described as an 'alter ego,' and is not necessarily a secondary power but is instead a result of Circus' deeper connection to their passenger.[9]

Circus' power granted them superhuman reflexes, balance and coordination,[10] enhanced aim,[7] spatial sense,[4][11] minor pyrokinesis,[4] and an extra-dimensional storage space, which they used to store a variety of items,[4] potentially including disguises.[6] They were considered a "grab-bag cape" give their wide spread of minor but related powers.[4][12]

Circus' aiming skills are sufficient to hit a horsefly out of the air by spitting,[7] place throwing knives only in nonlethal areas,[7][12][13] and hit their targets without line-of-sight.

Circus is highly practiced at effecting a quick change into costume aided by their pocket space,[14] and has general skills in escamotage.

Circus habitually carries a large, colorfully painted sledgehammer, colored streamers trailing from it, which they could make disappear after each hit, and reappear in a raised position or while spinning to speed up assaults.[4][13] They wielded throwing-knives, which benefited from their enhanced aim.[13][7][4] Further they carry road torches and similar for a base from which to summon massive fire-balls with their power.

Circus triggered as part of a cluster, given their mix of powers.[9]

Publically, Circus was one of the more successful solo villains around Brockton Bay, working as a thief. Their powers made them both quick and versatile enough to win or slip away if they crossed paths with a hero. At some point, they were offered a position on the Undersiders and vehemently refused, apparently remaining independent.[4]

In reality, Coil had recruited Circus over a year and a half before the events of the story.[15]

Fought Dauntless and Armsmaster when the Undersiders' backer revealed themselves.[16]

Circus was seen in Coil's base, being kept in reserve for the fight against the Slaughterhouse Nine.

They attacked the mayor debates with Coil, later being seen out of costume with Thomas Calvert. After Coil's Betrayal, they were found by Echidna while laying low. Alongside Uber and Leet, they were used to create the first wave of her clones.

They went missing shortly after Echidna was defeated.[11]

Joined Über and Leet as a trio, retaining the videogame theme. They briefly passed through Tijuana, Mexico, where they evaded authorities and caused property damage after detonating a device.[17] They eventually traveled to South America and tried to stay under the radar. However, after getting into trouble and crossing the wrong people, Leet was killed.[18]

Circus entered a relationship with Über, but the relationship didn't take. They split up both as partners and as a team.[19] 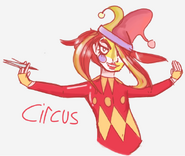