Chuckles is a serial killer, and member of the Slaughterhouse Nine.

Chuckles is described as a tall, pear shaped man. He usually dressed up as a fat clown and had an aversion to both basic and advanced hygiene.[1]

His clones had a noticeable different and drastic appearance with scarred tattoos for makeup and accordion-elbow arms,[2] still they had the same basic body type.[3]

Chuckles is a Brute and Mover. He has super speed in his head and legs and super strength in his chest and arms.[1] Unfortunately, Chuckles' powers cause him to perceive the world around him in perpetual slow motion, leaving him unable to communicate.[4] He taught himself how to make a sound similar to laughter - the source of his name.[5]

The original Chuckles may have had greater versatility with his abilities with developed tactics that were not displayed by his clones.[6][7]

Chuckles attacked a police station at one point in his career[8]. Was at Riley's house on January 20th 2005, when the nine recruited Bonesaw into their ranks.[5]

Chuckles was dead, however the member he helped recruit came across a DNA sample from the former clown.[9]

Multiple clones were created which differed considerably from the original. Besides scarification to approximate clown makeup the clones were also made with 30 additional elbows, able to make accordion like punches.

Various Chuckles was used as back up and a type of communication network.[10]

A Chuckles clone participated in the Oil-rig battle on the first day of the End of the World. He deployed with Clockblocker, Gentle Giant, and one other cape against Zion[11]. After proving ineffective he returned with his battered allies in his arms.

Chuckles was not seen again. 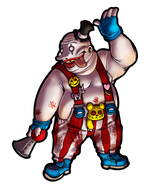 Image by Scarfgirl
Add a photo to this gallery

Retrieved from "https://worm.fandom.com/wiki/Chuckles?oldid=53638"
Community content is available under CC-BY-SA unless otherwise noted.