Worm Wiki
Register
Don't have an account?
Sign In
Advertisement
in: Articles in need of cleanup, Citations needed, Characters,
and 10 more

Independent, affiliated with the Red Queen

Chris described himself as an introvert. Capricorn noted that he rarely spoke up in online chat.[5] He knew how to use the advanced features of the PHO search function.[6][7] Further, he was able to work through school materials in a self-directed manner, helping him gain some semblance of an education.[8]

His personality is occluded, as his constant changing of forms also affects his mind.[9]

Because of the nature of his power, he developed some morbid interests.[10]

He is extremely sensitive about his privacy and boundaries, which results in him being overly controlling in his civilian life.[11] On the internet, it made him quite adept at sockpuppeting and information hygiene.[12]

Chris has 32 individual PHO accounts, which he rotates through.[13] Known examples include:

Chris has a program set up to duplicate his preferences between different accounts on PHO. He claimed that it was helping him "find out things" regarding an individual or individuals he believed was surveilling him.[18] He also said that the different usernames correspond to physical transformations he underwent.[19] Chris later claimed that the entire thing was a ruse designed to draw out Heart_Shaped_Pupil's snooping tendencies.[20]

Chris has pushed back against Kenzie's constant prying and surveillance, even setting up ruses to catch her in the action.[18][15] They did get along sometimes, particularly when Chris was using Wan Indulgence or a similar transformation.

Sees her as a mother figure.

Said that he liked him better then other members of the chatroom group, and was willing to share tinkertech medical supplies with Rain if it meant saving his life.[22]

On at least one occasion, he provided a verification image for his account "Curious_Cephalopod" that appeared to be a literal cephalopod. He indicated, falsely, that his transformations followed a known schedule, and that he would be an insect in a few days.[19]

Chris has brown curly hair and large braces.[23][24] As he changes between his forms he constantly needs to adjust the braces.[25] The need in braces is permanent, since he reverts to his original form after transformations, re-ruining his teeth.[26] With each form, he rotates through a small but permanent change occurs with his body, an addition in one area that causes a subtraction in another.[27]

As Cryptid, Chris used eight core forms[28] each tied to his emotional state with strengths and weaknesses inherent in each of them, which combine with secondary modifiers that add altered characteristics.[29] Further, he can combine traits from different forms into a hybrid form with hybridized abilities.[30]

If Chris doesn't use his whole range of emotional forms, such as trying to stay in one too long, he claims it negatively impacts his psychology and train of thought.[31] These changes can be euphoric in how they affect his mood, he likens it to a narcotic.[28]

His exposure to his own monstrous forms allegedly gives him resistances to horrific mind effecting powers.[32]

He has claimed to have two transformations a day, although on one occasion he has been seen to transform three times in one day.[citation needed]

He generally carries around medical supplies(including injectors) along with videogames and a walkmen, which he says were provided by others to ensure any transformation he undergoes is not the last one[59] and to stave off boredom respectively.[60] In actuality, these injectors are his own tinker creation and the cause of his transformations,[61] with the game unit functioning as a Tinker scanner for powers and similar.[62][63]

Claimed that he triggered after Gold Morning.[64]

In reality, his earliest memories were about fighting off Breed spawns and escaping decontamination, since he was created by Lab Rat as an emergency survival measure at the start of the Gold Morning. Though he did not fully align himself to his progenitor until later - an uncomfortable process, forced on him by imperatives designed into his body, which he eventually escaped from midway through.[61]

By his own admission, he was once involved in involuntary manslaughter.[65]  This is most likely a reference to the couple that followed Chris into Lab Rat's lair, only to be killed by the security system.

Strange_Mammal joined a team of parahumans.

They successfully enticed Heart_Shaped_Pupil into revealing that they had been reading Strange_Mammal's chatlogs.[20] This revelation did not cause Strange_Mammal to leave the group.[16]

At some point, he gets confronted by Jessica Yamada about his lies. Chris claims that it is a matter of survival for him.[61]

Attending therapy with the rest of the group. He is working his way through study packets provided by the education system instead of actually going to class.[8]

Met the coach, was not impressed.

Was a major factor in the survival of Rain.

The overuse of his abilities 'damaged' his body.[66]

Assisted Marquis with treating a suspect, was competent.[67]

Cryptid had the gall to play games with the Goddess,[68] when she took the lead of Breakthrough.

Tried to attack Goddess with one of his forms but she dealt with the situation and sent him off on an errand.

He would meet up with Amy and they were able to persuade Goddess's wayward clustermate to join them and head to the prison Goddess was in the process of usurping.

He left for Earth Shin with his Red Queen.[69]

In the wake of Navigators-related ambushes, his dossier gets delivered to Victoria Dallon.

Was spotted on New Zealand.Shin alongside Amy and Marquis revising local parahumans and preparing government transition.[70]

Chris joined Amy, Marquis, and Spruce in meeting Breakthrough when they visited Shin.[71]

Delivered news about Teacher's end and Breakthrough being admitted into the upper league.[72] Was given the go-ahead on his preparations from The Red Queen.[73]

When The Ice Breaks SDI labs was destroyed. Albeit, Chris was able to recover some equipment.[74]

Chris continued protecting Shin against Titan Arachne with the remainder of SDI.[75] He rerouted the majority of giants against Titan Fortuna, once she brought her attention to Earth Shin portal. Chris met Breakthrough again.[76][77]

Chris additionally empowered his Giants to counter newborn Titans, that immediately started slaughtering heroes. He even resorted to empowering The Mathers Giant, with some help with syringe delivery from Sveta Karelia. Chris also healed Victoria Dallon from mutations given by an abrupt contact with Titan Ophion and told her about the clone-skinpatch that Amy Dallon stole.[78]

He followed Sveta and Byron Vera to the Shardrealm, re-joining Breakthrough near Contessa's crystal.[79] Chris provided some healing for Tristan on their way there.[80]

Chris was targeted by The Simurgh's manipulations.[81] He participated in the Wardens' battles with The Simurgh and Machine Army, and brought SDI with him.[82] He agreed to execute Victoria's plan through collab with Bonesaw.[83] Cryptid eventually arrived to the labs together with wounded Victoria and Byron. Faced with the severity of their injuries he begrudgingly shared some of his reserves. Seconds later Chris lost contact with The Mathers Giant. Victoria volunteered to deal with it and suggested him to switch to his bird form.[84]

Despite the Simurgh being driven out of The Wardens' Complex, Chris walked out of his arrangement with Victoria, and had a short scuffle with her and Rain. He also started spreading half-truths about the plan to safeguard himself from possible retaliation and sabotage it further.

Following the consultation with Jessica Yamada and Riley Davis, the Wardens decided to try to capture Chris, before he would have an opportunity to interfere with the Victoria's plague deployment further.[85] Chris managed to evade the capture until the plague had its effect.[86]

Chris was eventually captured, and remained imprisoned at the end of winter of Y3. With Kenzie Martin visiting him daily.[87] 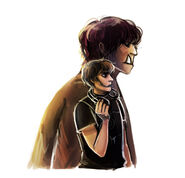 'Mad Anxiety' by DerTodesbote on Deviantart 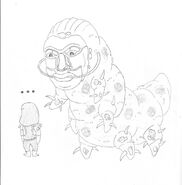 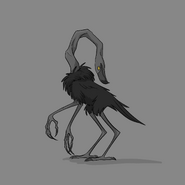