Worm Wiki
Register
Don't have an account?
Sign In
Advertisement
in: Articles in need of completion, Characters, Females,
and 8 more

Interlude 11g
Cherie Vasil, also known as Cherish, is the wayward daughter of Nikos Vasil, the eldest sister of Jean-Paul "Alec" Vasil and Darlene Vasil, and a member of the Slaughterhouse Nine.

Like her brother, Jean-Paul, Cherie is intelligent and lacks emotional capacity almost to the point of being a sociopath. Raised in an environment of hedonism and exploitation, she was allowed to indulge in any vice she desired from a young age.[2] Unlike her brother she revels in both the exploitation and use of her abilities, wanting to forge her own path she descended into becoming a serial killer.

Cherie thinks of her father as unfocused and petty, losing all respect for him after he attempted to add a movie star to his harem and endangered the Heartbroken while doing it. She was desperate enough to escape his attentions that she joined the Slaughterhouse Nine.

Not much is known of their relationship prior to Jean-Paul running away from home, but they had previously been made to practice their powers on each other by Heartbreaker. In the present day, Cherie shows no qualms with attempting to kill her brother via turning his minions on him. She sees him as somewhat responsible for Heartbreaker's behavior after Alec ran away, and nominates him for the Nine as "payback".

Cherie is a slim, conventionally attractive young woman with dark hair with a red streak running through it.[3]

During the Slaughterhouse Nine's tests, Mannequin had her tattoo her stomach and chest with gigantic, hideous raised tattoos that distorted her body and distracted from her natural beauty. When Jack Slash could think of nothing more to be done during his test he had her go through the other tests again leading her to getting a matching tattoo across her back.[4]

Cherish has the ability to both detect and control emotions. She interprets emotions as a form of "music" that comes from the mind and body of her target with each different emotion having a different "sound",[5] making it easy for her to track her targets.[6] While her power did not have natural long term effects, she could build up a dependency within a target by 'dosing' them repeatedly until their brain conditioned itself.[7] Presumably this is how she can get a crowd of boys to act as her personal entourage when she was shopping.[8]

Cherish has displayed the ability to detect people's emotions from across the entire city, both allowing her to track them and allowing her to detect their relationships with each other. She can also deduce capes based on their greater emotional volatility. She is able to tell who people are based on the emotional signature she gets from her powers.[9] When close enough, she can induce emotional states in her targets at will.[3][10]

A side benefit of her powers was that she could pick up languages easily, since she could already intuit the meaning behind the words.[11] She speaks Latin, and presumably speaks French as a native of Quebec.

As a human based Master she was resistant to, and interfered with, similar Masters. Regent's control over people kept her from forcing his puppets to hurt themselves, while her ability to emotionally overload people effectively made them useless to him. He himself was highly resistant, if not outright immune to her, given a lifetime of exposure.[3] On a similar level a Master like Gallant would confuse her emotional topology, Cherish would be immune to the emotional aspect of his blasts but not the concussive aspect of them. Further, his blasts could dispel her emotional manipulation, one way or the other.[12] Glory Girl's aura might have a similar effect on Cherish's Thinker senses.[13][14] Interestingly her powers make her an effective counter to Stranger-type infiltrators like Satyr, who is able to change his form but not his mind. Cherish isn't able to see or hear Imp, but she was able to sense her emotions.[15]

Cherie Vasil was born in Montreal, Canada to Nikos Vasil and one of his "wives". At some point, she triggered and took part in the wider family business of exploitation.[8] Eventually she grew tired of her father's short sightedness and decided to run away in order to escape her father. Her father sent two of her brothers after her who chased her,[3] until she decided to join the Slaughterhouse Nine.

Nominating herself to fill a vacancy in the Slaughterhouse Nine's ranks, Cherish ambushed Hatchet Face, killing him. After this, Cherish had to go through seven tests from the remaining members to join the Slaughterhouse Nine. Crawler, not feeling Cherish was even worth his time, took the murder of Hatchet Face as his test completed in advance. Bonesaw infected her with a parasite which nullified her powers for forty-eight hours, the effects of which would become permanent unless she drank "lots of blood" - but Bonesaw didn't tell her how much blood was needed, nor if blood from animals would work. Siberian did her usual test, and chased her for three days and three nights (starting on the second day of Bonesaw's parasite), biting off a finger joint each time she was caught until time was up. Five minutes after Siberian's test ended, Shatterbird stuck Cherish in a blacked out room with a shard of glass pursuing her for an undisclosed period of time. Burnscar test is not known; Burnscar generally requires potential members to face their greatest fear, but what that meant for Cherish is unknown. Cherish failed that test, but it's also unknown what the penalty for failure was. Mannequin ordered her to get a massive, hideous tattoo that would degrade her in other's eyes.[4]

When she finally got to Jack Slash's test, he was slightly upset that she was already broken, so his test was to go through the other tests all over again. Bonesaw even revived Hatchet Face for it, and Cherish was forced to kill him again, this time without the advantage of surprise.[16]

Cherish was used by the Nine to locate potential members upon arriving at Brockton Bay. After a less then cordial reunion with her brother she accompanied Jack when they had an impromptu meeting with the Undersiders and the Travelers. Her machinations to subvert and control the Nine were revealed by Tattletale and leaving Cherish fearful for her life. When the Slaughterhouse Nine disposed of the Merchants, Jack did nothing to assuage her of her fears, though he implied that she could earn a reprieve. When Cherish discovered an anonymous stranger amongst the Nine she tried to cut a deal.[17]

After she was captured by The Undersiders, Cherish was held by Coil on an abandoned boat in the Boat Graveyard and interrogated. She later got in touch with Jack, telling him her location and that he was destined to destroy the world.

As they left, the remaining members of the Nine visited her prison, taking their revenge for her treachery. Bonesaw modified her to only sense negative emotions and removed her filters. They then placed her in a prison of Mannequin's design, throwing her into the bay,[18] she rested in the Boat Graveyard.[6]

Being locked into a state she felt and could influence negative emotions she caused havoc in a small area around the docks. This was brought up in the mayoral debates.[19] Danny told Taylor that the zone she was creating was getting in the way of the Dock workers' projects.[20][21]

Cherish was later used in the battle against Butcher.[22] The villain was lured into her range, and thanks to the multiple voices inside his head, Butcher was more influenced by her power, committing suicide. Butcher's powers then presumably transferred to her. She was then transported deeper in the ocean where she could contemplate her predicament,[23] likely for a very long time.[24]

Nine Cherish clones were created as a part of the Slaughterhouse 9000. One is killed by Golem and his allies at the start of the event.[25] Seven are killed by Dragon,[26] and the ninth was offed by Weaver.[27]

Cherish may have died when the Eastern Seaboard on North America was destroyed.[28] However, no nearby capes are recorded as inheriting Butcher's powers, so she could have survived. On the other hand, she is not mentioned later in the Gold Morning, despite having an extremely useful power. 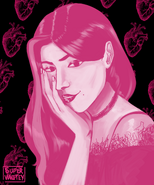 Fanart by Superwhiteys on Tumblr