Worm Wiki
Register
Don't have an account?
Sign In
Advertisement
in: Articles in need of completion, Characters, Females,
and 7 more

Paige Mcabee is a Rogue and a singer. Her stage name is Bad Canary, or just Canary for short.

Paige is a lover of music. She showed no desire to harm others, only wishing to use her power to enhance her singing career.

For a full grown woman with her range of experiences she is still naive about things.[4]

Was touched by the efforts that Dragon went through to keep her out of prison.[1]

Felt that she owed the hero something after hearing everything Dragon did for her.[2]

Paige entered Lustrum's cell block so that she would survive her time in the Birdcage. The super villain gave her protection.[5]

Canary did not rejoin her block during the Birdcage release.[6]

Paige is a young woman with bright yellow feathers growing among her hair. For PR reasons she dressed in bright colors to enhance her "canary" image and reduce any potential similarities between her and the marble-white Simurgh,[7] who also happens to be a well-known Master with feathers.[8]

During Gold Morning, she wore yellow Dragonslayers body armor with a helmet.[9]

Canary's power makes her a superlatively-good singer, but it also makes anyone who hears her song susceptible to suggestions. This Master aspect of her power is capable of affecting anyone that hears her singing and is powerful enough for the PRT to issue her a threat rating of Master 8.[3] An issue with her powers is that it doesn't come packaged with any kind of instinctive ability to tell when someone is under the influence of her Master ability, which can accidentally cause words that were intended to be part of an ongoing conversation to turn into a power-enforced command. This caused an unfortunate incident when she inadvertently told someone who she was unaware was currently under the influence of her power to "Go fuck yourself!".

Her power does not only make those who hear it susceptible to her suggestions. Anyone can give suggestions. These suggestions have a wide range of applications. From physical reactions such as being told to nod ones head to involuntary actions. Being told to calm down will calm an affected subject even if the situation is immediately dangerous to the individual.

The suggestions tend to be taken extremely literally. The above incident for example. Another example is one subject being told to hold still results in the subject attempting to hold his breath until the suggestion was amended with additional commands allowing breathing. Whether he would have suffocated or passed out from oxygen deprivation or taken in a breath at the last possible moment is left unclear. Forgetting is also a possibility [10]

Her power is severely muted when transferred by technology.[11] Even minor effects can be dangerous of course, as can be seen in the descriptions of some of her raw vocal recordings.[12]

Paige purchased a vial from Cauldron, asking them to give her a power that would help her build a career as a stage musician.[7]

She became a moderately successful singer. Her songs included but were not limited to: Vulgarishous, Ur-sound, Lineless,[13] Traveling Hum, Meet Screen, Anti-insomnia, Without Whisper.[14]

The effect of her songs on people was known but was usually edited out and deleted out of commercial products. Some of her corporate sponsors didn't feel the need to take any extra precautions.[14]

Paige accidentally compelled her ex-boyfriend to maim himself after an argument. He claimed that he encouraged her to perform on stage and was therefore responsible for her success, and that because of this he deserved half of her earnings, conveniently ignoring the fact that he then cheated on her and left her while telling her she would never make it for real. Her retaliatory insult when heard by her power-influenced ex was interpreted literally.[3]

She was tried while under heavy restraints, both to keep her from speaking as well as physically restrained for a suspected and non-existent Brute rating. Her master rating also hindered her ability to contact her lawyer, who at times could take hours or days to reply to her emails. This was partially due to the effect of the Simurgh on the psychological state of the world and Canary's similarity to the endbringer.[8] Despite Dragon's personal support for her, the court eventually sentenced her to life imprisonment in the Birdcage.

She was transported there with Bakuda and Lung.[3]

She was pointed towards Lustrum's cellblock by Dragon.[15]

Paige was questioned, following Lung's rampage through the prison the earn cred, about her fellow prisoner by the other cell block leaders about him.[5] She was unable to be a useful source of information.

Upon the announcement of Alexandria's death Canary performed a funeral dirge heard by everyone in the Birdcage.[16]

In 2012 a collection of her unfinished tracks was stolen by unidentified villains who had been hired by fans of Canary, the music was put on the internet coming in two versions, one of which hadn't been scrubbed of its mind-affecting properties.[14] Some interesting side tracks are also included.

Canary was eventually freed to help in the fight on Gold Morning.[6]

Paige wound up sharing a hospital room with a recovering bug controller.

She joined with Weaver and the remaining Undersiders to help deal with major threats, although her powers and personality made her of minimal use as an offensive damage-dealer. Nevertheless she was outfitted with a suit that belonged to the Dragonslayers by Saint as a gesture of goodwill.[17]

Was in the Cauldron Compound infiltration team.

Canary's power ended up being absolutely critical to achieving victory during the Gold Morning. In addition to allowing Khepri to calm down the parahumans making up her swarm, who had started dying to stress-induced aneurysms, it was the key that allowed Khepri to keep coordinating the capes even after Doormaker's shard running out of power caused her to lose direct control over almost every single parahuman in the swarm.[18] Khepri's own encroaching insanity had made it impossible for her to understand or use anything resembling language, and she had no way of extending the radius of her power and restore direct control over the parahuman swarm without Doormaker. However, Canary was still within her range of influence and Khepri's plans and ideas were communicated to the swarm of capes via Canary's singing, and most importantly the Master influence that accompanied the singing made those capes use their own initiative to work together and thus successfully implement Khepri's plan of attack.[19]

At some point Paige joined The Wardens under Valkyrie's aegis.[20]

Canary was a part of the Wardens' raid on Teacher. She played a key role in Contessa's plan to win the losing battle.[21]

Canary was one of the Wardens assisting with the mass incursion into The Shardspace.[22]

Illustration by liujuin on DeviantArt 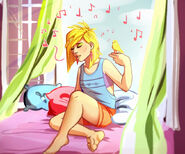 Image by Pabel and Nine on Tumblr