Worm Wiki
Register
Don't have an account?
Sign In
Advertisement
in: Articles in need of completion, Males, Heroes,
and 9 more

Glow-worm Part 2
Flare 2.7
Capricorn, PHO username Cap, real name Byron Vera[2] is a member of Breakthrough, and a Case 70 with his brother Tristan, a power expression phenomenon where two people share a body after the trigger.

Together, they were members of Team Reach pre-Gold Morning.

Byron is a twin of Hispanic origin.[3] His family is Christian and he continues to attend Church with them.[4]

Tristan and Byron take two-hour shifts in controlling the body, while the other twin is conscious within.[5]

Byron is passive in comparison to his brother, and is known for complaining about things without offering concrete solutions.[6] Tristan is buoyed by conflict while Byron is drained by it.[7] They even have different ways of speaking.[8]

Byron lives with family in The City.

Byrons relationship with Tristan is highly fractious, though they do still love each other. Prior to their trigger event, Byron felt that Tristan's competitive nature was squandering his own relationships, while Tristan felt that Byron was too passive.[9] This unhealthy dynamic was exacerbated by their situation as a Case 70 throughout their time on Team Reach.

Following Gold Morning, their relationship had improved significantly. Byron had forgiven Tristan for what he had done, although Tristan continued to be confused by Byron's attitude towards him.[10]

Brianna liked Byron, but was antagonistic towards Tristan. Although both brothers considered her excessively judgmental, Byron accepted her companionship, and Tristan was able to tolerate her.

She has become hostile to Tristan and interjects into the brothers relationship to make sure Byron gets to have his say.

Out of the members of Breakthrough, Rain is the closest to them. Rain goes out of his way to hang out with both of brothers.

Vista professed strong interest in Byron, which Byron reciprocated. However, due to the situation with his brother, he was hesitant to go ahead with any romantic moves before they laid down any boundaries.[13]

Byron differs from his twin by wearing his medium-long dark hair slicked back, with accompanying dark clothing. He lacks the air of bravado that Tristan exudes.[15]

Byron wears an armored metal costume, a blue ichthyology themed one with fins and scales and similar.[8] They knew how to keep the armor in good repair.[16]

Capricorn is a matter creator; both Tristan and Byron generate and shape glowing energy that they then transform into their respective element. These start out as motes that then have lines link up between them which then become their respective element. Tristan makes rock, Byron makes water.[17] They can swap identities rapid fire if they have to.[18] The swapping had mixed results as anti-master measure.[19][20] But it has been known to affect physical forces, granting some maneuverability.[21]

They are able to create enough material for things like a fort.[22] And can shape the material around single objects and people. It is unknown if it can be safely carried out on living objects. What they can do is for Byron to spray people with water and then switch to Tristan to turn the water into rock and encase the subject.[23] This switch can only happen if the shapes are "alive" with more energy to back it up. If they let it die a switch can not happen. Water evaporates and the stone easily crumbles.[24]

Tristan and Byron possess different moderately enhanced physical abilities. Byron has a bit of resistance to temperature extremes, meaning he can withstand greater cold and greater heat than most people can. Byron also has an enhanced way of breathing, as shown by his being able to continue speaking while being choked out.[25]

Interestingly, their powers took on its present form after they had fully assumed their cape identity from the previous holder.[23] Previously, Byron could create ice[26] or suffocating gas rather than water, and Tristan initially formed metal. During Byron's imprisonment, Tristan created chains of spikes which moved of their own accord, lashing out at their surroundings.[27] The properties of the matter they create seemed to be related to the brothers' relationship with each other.[28]

After things were damaged in the Firmament, Byrons power changed. Byron now creates motes with a more teal colour, that spawn a gaseous cloud that freezes everything it touches, before consolidating into an abstract ice sculpture. Now when changing back into Tristan, the cloud of gas doesn't fully disappear, and a building of Tristans power will burst out.[29]

Had an extremely rare trigger event, based on their sibling rivalry coming to a dangerous head. Byron was catatonic for several weeks following the event but Tristan was able to be functional and keep them going.[32]

Roughly a month later they were recruited into Team Reach.[33] The team set them up with the Capricorn identity after they came on board. Brothers were able to achieve some degree of interpersonal balance and shared goals while being on the team, with Tristan quickly assuming leadership position[34] and Byron discovering his competitive side and enjoying hero teamwork. However, it did not last for long.[35]

The situation was detrimental to both brothers' mental health, with Tristan losing weight and not sleeping well, and Byron resorting to self-harm.[36] Team Reach began to confront the supervillain Paris, who had a habit to target queer heroes.[35] In one altercation, Tristan framed Paris for Byron's death, while imprisoning Byron; he later explained it as result of his natural desire to perform his best at all his roles while having only half of the time. Tristan's guilt weighed heavily on him, but fearful of the consequences of telling the truth, maintained the ruse for 72 days, only freeing Byron when his team interfered.[37] This incident alienated Tristan from his family, leaving him without a team and pretty much anything else.[12] He, likely, would have been charged with attempted murder if the trial was not interrupted.[38]

The proceedings for Tristan's murder charge were interrupted by Gold Morning, and Byron did not press for more punishment.[39] Capricorn was "dragged into" the event.[40]

Talked to Team Reach on the newly-revived Parahumans Online. Tristan hired some shady enforcers online for purposes of maintaining fair time-sharing.[41]  Participated in a group chat on PHO with several groups including his therapy group and members of his old team.[42]

Tristan wants to become a hero again while Byron does not agree with this. Byron was worried that Tristan would fall into the same patterns he had before.

Tristan hit it off while Byron was not as happy with things. The mistakes of their past continue to dog them.

Was part of the initial forays into Cedar Point

Were major factors in their teams actions against the Fallen. Byron was able to handle Valefor's taunts better then Tristan.

The twins were part of the action against Trial and Error where their powers proved ineffective.

When the team were mastered by Goddess, Byron was the only one to avoid it, due to Tristan being out instead of him at the time. He attempted to convince the team to stop, and even attacked Victoria, to no avail. Enacting Master-Stranger protocols, he managed to convince Victoria to follow his lead, and they went to help the Major Malfunctions in a fight with the Pharmacist and Teachers thralls.[43]

After the fight, Byron revealed to Victoria the deal the Capricorn brothers had made with Barcode. Namely, that Barcode would ensure that the brothers were giving each other an equal amount of time, with the alternative being a fate worse than death.[44]

When Goddess arrived at the Breakthrough headquarters, Byron was mastered like the rest of the team. He participated in the takeover, the fight against Lung, and stopped the ankle bombs from working.

After Goddess was killed, Byron and Tristan met up with Barcode and started a new deal.[45]

Byron went on a shopping trip with the rest of the team.

Capricorn assisted in surveilling Love Lost and her group in the Lyme Center.

While investigating the attack on the Navigators, the group of heroes was attacked and Tristan was shot. Byron had to stay out until he could get treatment.

Capricorn and Tress joined Tattletale and some of the Heartbroken in attempting to track down Cradle. The group was ambushed. Byron has the opportunity to kill, or at least severely hurt, Paris as he is frozen by Juliette, but opts not to take it.

During the fight, Tristan is bisected by Cradle.[46]

After Tristan's death he, Sveta and Chris Elman followed Antares and Rain to the Shardrealm, and met them near Contessa's crystal.[47] Tristan received some healing from Chris on their way there.[48]

After the return from The Shardrealm Jessica Yamada helped Byron to break the news of Tristan's death to his parents.

During the initial fight with The Simurgh, together with Vista and Clockblocker, he attempted to anchor and freeze The Endbringer.[49]

After the Breakthrough's return to the Wardens' Compound Byron was severely wounded in a fight with Bloodplay. He eventually arrived to the labs together with Victoria and Chris and was able to tend to his injury, but at that point he was worn down by The Simurgh's constant reminders of his brother.[50]

He later rejoined the fight with The Simurgh, together with Vista and The Wardens.[51]

He stayed together with Vista and received the parahuman plague directly from Victoria, after assurance that it will not knock them out too early. He decided to wait its activation at his parents and invited Vista alongside.[52]

Byron reunited with a holographic version of his brother at Vista's eighteenth birthday part.[53] 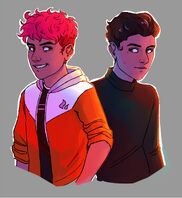