Parasite 10.6(full description)
Mimi, publicly known as Burnscar, is a member of the Slaughterhouse Nine.

Mimi is described as twentyish, with badly cut dark brown hair,[1] green eyes, and cigarette burns from the bottom of each eye to her jaw. Her skin was pale.[2][3]

Taylor described her voice as being "like an actor reading the lines from a script without actually emoting them."[2]

Burnscar's mental state was influenced by her power; if she didn't use it, she would become depressed, but the more she used it the more reckless she became.[4] She felt guilty about the things she had done when she wasn't using her power and would use her power to escape that feeling.[3]

Her test for prospective members of the Nine was to force them to face their greatest fear, although that wasn't always possible.[5]

One of Burnscar's treasured memories was talking with Labyrinth at the Parahuman Asylum during their "good days." She saw Elle as a friend. Burnscar didn't seem to notice when Elle was being sarcastic.[3]

Burnscar wanted to come to the Bay in order to meet her former friend Labyrinth, but didn't want her to actually join the Slaughterhouse Nine, as she was fond of Labyrinth. Her feelings were not reciprocated by Elle.

Sat close together when they had time to themselves. They got along well.[7]

Mimi is a pyrokinetic who can teleport herself freely through flames. She becomes increasingly psychopathic the more fire is nearby. She is also completely fireproof.[3]

Mimi's pyrokinesis is extremely versatile. She created concussive fire blasts capable of knocking over the Undersiders and Bitch's dogs,[8] shot twin flamethrower-like streams of fire from her hands,[3] and could send fire "snaking" across water.[8] She could put out her fires at will,[6] create walls of fire,[6] and leave burning footprints that widened into a trail of fire.[3] She could also throw fireballs[4] that could punch holes through walls[3] by summoning fire to her palms and hurling it. Out of battle, she shaped her fire into foot-high images of characters from her comic books[6] and from her memories while reading.[4]

Using her power adjusts the chemical balances and connections in her brain to reduce her empathy, impulse control, and emotion, so she "can’t help" using her power if there’s fire nearby. This creates a cycle where Mimi is increasingly unlikely to stop using her power the more she uses it.[3]

Mimi's eyes glowed[1] and would occasionally flash orange when her power was active.[3]

Bonesaw also modified members of the Nine with various "safeguards"; sheathing their vital organs and major arteries in a protective sub-dermal mesh, further wire reinforcement was put into the skeleton to avoid broken bones,[9] with special attention was paid to the organs and spine to keep them functioning.[10] She also rendered her teammates resistant to her pathogens,[10] and granting them artificial neurons which allowed them to make plans Cherish could not see, it is unknown if this could be adapted for other Master powers.[11]

Mimi was a patient at the same asylum as Labyrinth. She looked back on their conversations as treasured moments and saw her as a friend, although in reality the guards used Elle as an enticement to make Mimi cooperate. When Labyrinth was freed by Faultline’s Crew[12], Mimi escaped as well, spending some time on the streets.[3]

When she used her power to scare off a pimp who was harassing her, she lost control of her emotions, killing him and trapping herself in a feedback loop. Shortly thereafter, the Slaughterhouse Nine found her during one of her psychotic episodes. With her conscience and empathy being suppressed, she found them good company, by the time Mimi cleared her head however she had a kill order.[3]

Burnscar visited Brockton Bay as a member of the Slaughterhouse Nine. She didn't nominate anyone to join.[4] However, she was excited to come,[13] hoping to meet Labyrinth there.[3]

She rescued Mannequin when he was losing against the Undersiders and had him forfeit his turn, ending his testing phase and beginning hers.[14][8]

Burnscar was cloned as part of the The Slaughterhouse Nine-Thousand, although the clones were never shown in combat.[16] 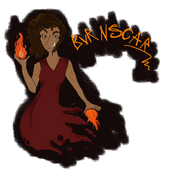 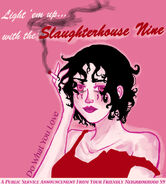 Image by Jellytier on tumblr.