Worm Wiki
Register
Don't have an account?
Sign In
Advertisement
in: Pages with reference errors, Articles in need of completion, Citations needed,
and 14 more

Brian Laborn, known publicly as Grue, is a member of The Undersiders.

Brian has an overly professional demeanour, as well as a desire for personal freedom. He readily accepts burdens when it comes to his family and friends, but he values his ability to walk away from it at anytime.[3]

Brian is a cautious individual who tries to prevent emotion from affecting his actions. He appreciates practicality, and tries to have a plan whenever possible. When pressured, Brian uses self-discipline and rules in order to cope.[4] Tattletale described him as pragmatic, with a tendency to take a lot for granted and act automatically brought on by several years' experience as a cape.[5] This points to long term issues with intimacy.[6]

Brian is well versed in multiple martial arts, being able to pick up the basics very quickly,[7] but he does not dedicate himself to one particular style, being more interested in using a plurality of styles. He was confident enough to train his teammates how to fight.

Brian took courses online, allegedly to help him pay for his apartment, so he didn't need to attend classes. He had trouble remembering that school was a factor.[8]

Grue was considered a barely successful, "B-list" villain prior to joining the Undersiders.[9]

Thanks to his solo career, the heroes had some information on his capabilities.[10] Grue had a Parahumans Online page describing his career and listing his power as "darkness generation".[11]

Brian had a falling out with his sister a year after he got his power and a year before joining the Undersiders.[12] While he does love his sister, their extended time together has made it easier for his sister to know what annoys him and exploit it.

He does try to keep Aisha safe how he can, from getting her to join the Undersiders to trying to stop her from forming a friendship with Regent.

Grue initially reacts to Taylor’s advances on him with the response that he thinks of her more as a little sister.[13] He had not had many relationships with unrelated women given his upbringing with his father.

However, following Grue’s second trigger, they had a brief romance. The author described theirs as a "failed relationship".[14]

The two teammates often trade barbs and general put-downs, but their insults lack any actual hostility.[15]

Lisa and Grue had a recurring argument over the fact that he lived separately to the team, leaving him nowhere to go when he was injured.[16]

Brian had a complicated relationship with Rachel. Grue was willing to use physical force to enforce his authority if needed when Bitch crossed a line.[17] He didn't understand how to relate to Rachel, Taylor helped with that.

Shadow Stalker believed Grue was her "nemesis" because of the interaction between their powers,[18][19] She used lethal force against him,[20] violating her probation with the Wards and, eventually, genuinely earning his enmity.[21] Another reason for this was the fact that he beat her soundly when they first fought.[22]

His girlfriend after Taylor, more conventionally attractive, but of a similar professional nature. Brian appreciated that she shared his desire for a modest lifestyle.[23]

Grue didn’t trust authority figures, preferring to be self-sufficient rather than relying on them.[24] Brian's reasoning on not joining the Wards was tied into the restrictions they would have placed upon him.[25]

Brian is an African-American teenager, physically mature for his age,[26] with a muscular frame, and a lantern jaw. He wore his hair in cornrows.[27] He was taller than any of the other Undersiders,[28] at least a foot taller than Taylor when they first met.[29] Multiple characters consider him rather handsome.[citation needed]

As Grue, Brian dressed in motorcycle leathers and a motorcycle helmet with a full-face visor sculpted to look like a stylized skull.[35] These incorporated side vents to allow the darkness he creates to flow outward, creating an eerie, dramatic effect.[36]

On at least one occasion, he carried a small crowbar.[37]

His equipment would receive defensive upgrades when Skitter finished making spider-silk costumes for all the Undersiders. The new outfit possessed a helmet with a more demonic design, as opposed to the skeletal motif of his previous helmet. It was based on a figurine Brian bought for the express purpose of inspiration.[38]

Following his resurrection Brian has a white skull-imprint on his face. He covers it with makeup.[39] His eyes are also slightly discolored.[40]

Brian can generate clouds of smoke-like darkness that erase all light and mutes sounds.[41][42][43]

It also interferes with microwaves, radio frequencies, radiation,[44] and certain Breaker powers such as those possessed by Shadow Stalker and Velocity.[45] He does not actually 'see' this darkness, he is aware of its location and when it is affected but it does not obscure his vision in the least.[46]

His power nullified Shatterbird's sound-based glass control,[47] but Cricket's sonar was able to function in his darkness.[48]

His darkness offers some resistance, like pushing through water,[42] which can make it difficult to keep track of your position.[49] Grue's darkness produces something like a steady air current flowing from his skin when active.[50] This wipes away his scent whenever he uses his power.[51] This makes it hard for those with an enhanced sense of smell compared to base line humans to track him.[52][53] His power doesn't interfere with smelling other things that happen to be inside his darkness.[54][55][56]

A common tactic of his was to wreathe himself in his darkness[59] to distort his voice[32] and distort where his body is. He can use this to make himself appear larger.[60] He could form rough shapes out of his darkness, including a circular wall[61]. He displays further versatility by making a body double,[62] or several,[63] out of his darkness that was often convincing enough to distract an enemy. This tactic would later be borrowed and improved upon by his teammate Skitter.

Grue is able to cause his darkness to dissipate at will,[64][65] and could selectively dissipate sections at a time.[66] It naturally faded after about twenty minutes.[67]

After his second Trigger Event,[68] Brian's darkness became thicker, heavier, and came out less quickly, but grew exponentially. He also gained a Trump ability, that let him use the powers of other parahumans while they were in his darkness, suppressing their powers at the same time. He can only access one person's powers at a time,[69] though he can rapidly switch between the abilities he uses.

While using these powers, he was essentially using them for the first time, lacking the experience and skill of previous users. He generally didn't receive the benefit of thinker powers, including secondary thinker powers used to handle the fine details of a power.[70]

After the resurrection his power was adjusted by Valkyrie, specifically by scaling down his trump aspect.[71] Presumably, to avoid power interference between them.

Grue was abused by his mother's boyfriend when he was young, and fought to develop the strength and fortitude to never be that weak again. After going to help his sister deal with the same man at his mother's house, he was brought back to his weakest, darkest moment as he dealt with his mother's boyfriend. With the man's eyes on him, he found the power to immerse the world in darkness. The combination of the environment, malign attention, and the desire to protect his sister all factored into his power being what it was.[72]

Brian was active as the solo super-villain Grue for two years,[5][11] he was primarily active outside Brockton Bay.[73] He started out committing petty crimes, and acting as an enforcer for others, slowly scaling up over time.[11][3] During this phase of his career, Brian learned about the importance of reputation. Choosing the name Grue due to its obscure etymology, he did so with the presumption that the alias would attract a more sophisticated clientele.[74][75]

During this time Brian met The Adepts, and by extension Epoch. From this encounter, Brian discovered a deep hatred for people whose powers messed with time.[76]

He was eventually collected by Coil along with the other Undersiders and persuaded to form a team with them[77] around a year before the beginning of Worm.[11] With them, he began committing higher-profile robberies.[11]

At some point, he was shot in the stomach with Shadow Stalker's crossbow bolt[78] and bled all over the Undersiders' couch.[16]

Coming off a successful robbery of the Ruby Dreams casino several weeks ago,[79] they ran into a new bug-themed super-villainess. Saving the villain from Lung, they were able to quickly make their escape before Armsmaster arrived on the scene. he had been a supervillain for three years by that point.[75]

They would meet up with the villain later in civilian garb to recruit her to the Undersiders. They were successful and Taylor joined the team.

After Rachel attacked Taylor in an attempt to test her and possibly drive her off, Brian stepped in to stop things from going to far. He admitted to Taylor he would much rather have her on the team than Rachel but that his hands were tied.

He was devastated to learn that his teammate and closest confidant on team was a hero who had been planning to betray them.

Weeks later, with his sister now a member of the Undersiders, Grue was forced to let Skitter back into the Team.

Was comfortable with not resuming his role as the Undersiders leader.

Deployed to New Delhi with the rest of the Undersiders.

Settled back into his role as leader of the Undersiders. He also met and started a relationship with Cozen.

Grue was convinced by Weaver to join the Oil-rig battle where he attempted to use his darkness to copy Scion's powers. When he failed to copy them he copied Legend's powers instead and helped fight Scion before retreating with the other fighters back to the oil-rig. Scion appeared overhead and destroyed the oil-rig, killing Grue among several other heroes and villains.[80]

Grue was resurrected by Valkyrie and became a part of her Flock.[81] It was an unlikely choice, but Brian had proven himself enough during his time as a shade.[82]

Grue participated in the battle against Teacher alongside the rest of his team. He fought Spawner and other Ingenue's goons, and was critical in protecting Valkyrie.[81]

He remained in Valkyrie's team, while other members of the flock were returning to their old teams.[83]

Grue saved Valkyrie from being finished off by Auger. He was able to partially block the titans power and force him away, with unforeseen consequences.[84]

Following Valkyrie's titanification he returned to The Undersiders and helped to deal with the Lookout's freak out[83] by quarantining her power and keeping her company later.[85]

Grue helped Antares to reach and re-align The Mathers Giant,[86] and hid Dinah Alcott from the Simurgh.[87]

Illustration by Holocene on SpaceBattles 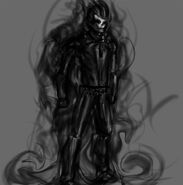 Illustration by Dertodesbote on DeviantArt

Illustration by Nick Meccia on Tumblr 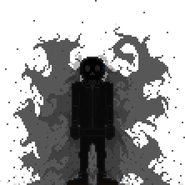 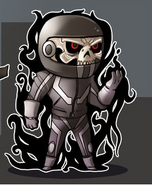 Illustration by Scarfgirl on DeviantArt 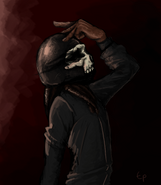 Illustration by Transphantom on Tumblr 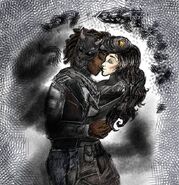