Breakthrough, accompanied by Chris Elman and Harbinger V, visited Contessa's seat of power inside the Shardrealm,[35] and received a series of visions regarding the nature of the Eye and the previous cycles.[36] Contessa also warns them about Simurgh taking over Titan Fortuna and summoning more Endbringers with the help of Titan Valkyrie and Eidolon's shade.[37]

Breakthrough participated in the initial assault on The Simurgh. Later, following her, they returned inside Wardens' Compound and helped to secure it. They received an order from Defiant to find and protect Dinah Alcott. After a run in with Bloodplay they were forced to split up, with Rain and Sveta following with their task, and Victoria, Byron, and Chris going to the labs to seek medical supplies.[38]

Together with The Wardens and The Undersiders they push The Simurgh out of the Wardens' Compound, with Rain and Victoria delivering the final blows.[39]

Defiant encountered them after the Simurgh's defeat. Victoria and Breakthrough found a way to set the genocide plan in motion even without Chris's help, beginning with themselves.[40]

The team was disbanded with Victoria and Sveta going into semi-retirement, and Rain preparing to serve the remainder of his sentence.[41] 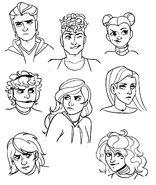 Retrieved from "https://worm.fandom.com/wiki/Breakthrough?oldid=57501"
Community content is available under CC-BY-SA unless otherwise noted.