Childish but largely amoral, Bonesaw lacks any aversion to killing, and even giggled and smiled in excitement when Panacea disabled her creations. As Bonesaw, Jack Slash encouraged her to view her creations as "art" and resist moralistic attempts to limit her.

She couldn't remember her parents' faces.[3]

Her obsession of following her mother's last instructions effected her general aversion to swearing and the bright sunny demeanour that she affected when interacting with others.

She is just as liable to laugh and joke with someone one moment as to carve them up the second.

Riley was a little girl who dearly loved her parents.

Riley eventually concluded her passenger was influencing her personality, which led her to betray the Nine.

Following her mother's last instruction to her, Riley was obsessed with being a "good girl".[3] This led to her adopting a 'cutesy' attitude speaking in a high voice and adopting overly girlish mannerism. In particular, she had an aversion to swearing bordering on a obsession. With a verbal tic constantly telling others not to swear.

In later years Riley is rather upfront about being unable to fully relate to other people.[4]

Has an obsession with rebuilding a family, this influences her choices when nominating people for membership in the nine.

Bonesaw saw Jack as a "father" to the Slaughterhouse Nine's "family", but also feared him intensely. She thought of him as very intelligent and all knowing. She felt a sort of confusion and rebellion towards him..[3]

Shares a borderline mother-daughter relationship with the beast woman. Siberian was often the one to sleep with her as she had nightmares. Though Bonesaw saw the Siberian more as a family pet the beast women felt quite protective and possessive of Bonesaw.[5]

Her longest relationship outside of the Nine, with the similarities in their abilities being a major factor in Bonesaw's interest in the biokinetic.

Riley is described as a young girl with blond hair curled in ringlets, with her dress often stained by blood.

She also usually carries on her dress a full kit of surgical tools such as scalpels. As Bonesaw, she was primarily accompanied by biomechanical "spiders", about the size of a dog; these creations have wetware computers based around brain tissue she scavenges from her various victims.[3] These spiders have innumerable modular functions, being used a distractions,[citation needed] assistants,[citation needed] and an impromptu exoskeleton.[citation needed]

When she returned to her Riley persona with the restoration of her sanity, Riley switched to more unassuming look.[6] She retained her tween appearance for the following years due to complexity reasons.[7]

Riley is a powerful biological Tinker, whose abilities make her an unparalleled expert in biological, anatomical, and physiological sciences.[8] As Bonesaw she is capable of creating bio-mechanical constructs with their own powers, these are usually capes she had captured and modified into "zombies", and a variable load out of biochemical vials.

An expert in neuroanatomy, she enslaved and modified capes. She had a limited ability to raise the dead, which she used to produce her "zombies".[9] Her understanding of the Corona Pollentia was unparalleled; allowing her to alter a parahuman's abilities to a limited degree, which she used to remove their control over their power and allow their powers to work together with other capes she had spliced to their body.[10]

Her crowning achievement was the creation of the The Slaughterhouse Nine-Thousand, using materials from Toybox.

She has several accouterments including a prehensile spine [11] and a extendable arm to stab others with.

One trick she frequently employed was a type of white smoke that automatically killed bacteria in her radius.[12] Useful against diseases Bonesaw does not have a cure to and effective against most insects, to the endless frustration of Skitter.

Has the ability to construct wetware computers that can record trigger events.[10] and could turn off the pain she felt through an internal 'switch'.[10]

During the Timeskip, she noted her ability to deploy poisons from vents in her body.[3]

Panacea removed everything Bonesaw had implanted into her body though she did not turn off the pain while she was doing this to make sure she did not miss anything she was removing.[6]

Riley triggered in 2005, at the age of six,[16] when she was forced to repeatedly provide medical care for her family by the Slaughterhouse Nine, injuring them over and over so she would have to heal them again, over the course of several hours,[3] if not longer.[17]

The Slaughterhouse Nine came to Brockton Bay to recruit shortly after Leviathan attacked. Bonesaw nominated Panacea and showed up in the Dallon household to tell her as much.[9] She mentally tortured Amy, making the teen kill several of her creations to show her that she could be destructive with her power. Further, she had one of her spiders inject acid into Mark Dallon's brain after the discussion turned to Panacea's inability to affect brains. She was forced to flee when Panacea proved she was able to heal brains and restored Flashbang's fighting ability enough to force a retreat.

Bonesaw participates in the slaughter of the Merchants by releasing a short term plague among the participants and later stitching some surviving members together into an artistic creation.[5]

She made Grue into one of her "art pieces" with the assistance of Mannequin.[18] This, along with her torturing of his friends and Taylor, eventually caused his second trigger event.[10] The enraged teen villain killed Burnscar and mutillated Bonesaw, chopping off her hands, before helping the Undersiders to escape. She also modified the residents of Dolltown to resemble the Nine in order to provide cover for their escape.

With the intervention of Legend and his team Bonesaw unleashed a plague, an agnosia miasma, on the city as punishment for "cheating" in the Nine's recruitment games. She had a final confrontation with Skitter and Panacea at the hospital before being repelled. She left another group of surgically modified people in the Boat Graveyard‏‎ as a final distraction while the Nine fled Brockton Bay, one of these people being Cherish as punishment for her attempted subversion and betrayal of the Nine.

Fleeing Dragon and Defiant, the Nine recruited Skinslip, Night Hag, and Damsel of Distress, whom Bonesaw surgically modified so she could control her power. Spearheading a raid on Accord's lab the tinker was confronted by Defiant, who stabbed the child tinker in the heart before bisecting her. Nevertheless, Bonesaw survived and kidnapped Blasto along with retrieved samples from the database.[19] A later raid on Toybox gave the Nine access to incredible technology and resources allowing the group to retreat into a private world where they could wait in suspended animation.[20]

During the two year waiting period, before the Nine were revived from cryonic suspension Bonesaw crafted an army of clones - The Slaughterhouse Nine-Thousand - but she began to have doubts about serving Jack Slash and about the distinction between her self and her passenger, prompted by Contessa. She allowed herself to grow up over the years, but reduced her apparent age and partially automated her nervous system before awakening the Slaughterhouse 9000 so as to hide the changes in her personality from Jack.[3]

Bonesaw joined the heroes during Gold Morning, although they didn't trust her. She was paired with Panacea, one of the few that could check her work.

With the lab destroyed she couldn't contribute to the fighting any other way.[21][22]

Valkyrie, 'the keeper of the dead', thought that with the help of Panacea/the Maker, she and Riley would be able to bring back the dead to refill their ranks.

Two years later Riley is working for The Wardens, still paired with Panacea and heavily restricted in autonomy[23]. In this time she developed some fondness for Nilbog.[24]

In the last year Riley provided Ashley Stillons with advanced prosthetics and their maintenance.[23]

After the portal sabotage, Riley was stranded alongside Jamie Rinke, Jessica Yamada, and multiple other Wardens' personnel and ex-prisoners near a remote settlement.[25]

Riley ostensibly was the reason that the most of the people survived, however, she backslided to her old habits,[26] raising suspicions and tension in the camp.[27] It eventually led to her fight with similarly stressed out of her mind Jessica Yamada,[28] shortly after they were found by Valkyrie.

There was found no evidence of other misbehavior on Bonesaw's part,[29] and Riley chose to stay in exile, with Valkyrie making visits as necessary.[30]

She was still active, tending The Flock.

Riley heard about Contessa being captured by Teacher and leaned into her paranoia, making it borderline impossible to contact her without an assistance from the members of the Flock.[31]

She was visited by Photon and invited to the fight.[31] Bonesaw accepted invitation, and it was decided that Riley was going to instruct Chris Elman on execution to stay on time.[32]

She provided her opinion on severity of wounds of Victoria Dallon and Byron Vera, forcing Chris to share his emergency supplies.[33]

Following Chris' defection Riley agreed to proceed on her own, despite not having obvious means to deliver results at the moment. She was later recovered by Valkyrie Titan as a part of the deal between Victoria and Contessa.[34]

Her opinion was one of the reasons for the Wardens to attempt to capture Chris Elman during the Victoria's plague deployment.[35]

Riley passed the winter in her camp, but returned to The City and The Wardens's custody at the end of the winter. She met Cryptid and Lookout during her visit to the local Wardens' office.[16]

She was provided with a monitored apartment by The Wardens.[16]

Riley informed Dragon about her conversation with Lookout, prompting Dragon to investigate.[36]

Image by macabredanse on Tumblr.

Illustration by AstriSjursen on DeviantArt.

Illustration by asphaltandblackberries on Tumblr. 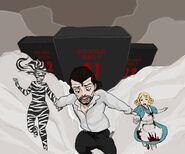 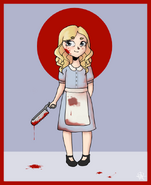 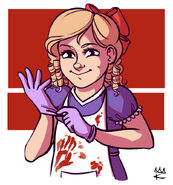 Illustration by CPericardium on deviantArt 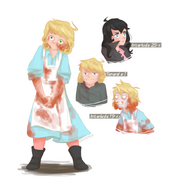