Behemoth (pronounced: "bih-HEE-moth"[3]) is one of the Endbringers. He is the first of the Endbringers, followed by Leviathan and Simurgh. He's a dynakinetic, meaning he has complete control over all types of energy from radiation to kinetic. On top of this he has no Manton Limitation and is the most durable of the Endbringers. Although he is very slow and incapable of dodging most attacks he can render a region uninhabitable over a course of a few hours.[4]

Behemoth is over forty-five feet tall. He has gray, leathery skin topped with cooled magma and obsidian-like crags, some of which can even reach 10 feet in length. His body is described as a muscle-bound caricature midway between a human and a bear. Behemoth's hands are merely mangled growths of obsidian-looking material and his arms are as thick as oak trees. In a gap between two of the horns[5] he has a single red, glowing eye. His mouth is a jagged gap, lined by obsidian teeth with a deep glowing coming from the throat. [6]

Most of Behemoth's powers are simply variations of his dynakinesis, an all-encompassing manipulation of all kinds of energy. What makes this ability even more dangerous is he isn't limited by the Manton Effect, meaning he can affect living matter as easily as any other material. The most common expressions of this are:

One of Behemoth's most iconic and feared abilities is his ability to create and guide lightning. Most likely he can generate anywhere but he typically launches it from the tips of his claws. These lightning bolts can range from an average-sized lightning bolt to being able to cut one of Dragon's craft in half in only five hits. These particular bolts are mainly used to start fires in areas that will burn the fastest and behaves like normal lightning. However, when he focuses on this ability he can blow apart Dragon-craft in one hit and produce bolts the diameter of an apartment building. Behemoth can also guide these bolts to hit pinpoint targets and clustered groups of people. They also defy the normal laws of conduction and can arc out of metal objects when normally they'd ground out.

Behemoth can bypass the Manton Effect and manifest energy within anyone who ventures within 32 feet of him, burning them from the inside out.[7][8] The recommended distance is over 100 feet so there's no risk of him closing the gap before one can get away. This ability makes anyone without extreme durability or ranged attacks nearly worthless in the fight.

Another signature ability of Behemoth's is to project radiation around himself. When he does this, he glows with white light.[9]

By using his manipulation of sonics and kinetic energy whenever he roars he can cause massive damage to an area or groups of people. Within seconds of being hit by it eardrums and eyes alike will often explode from the sheer force. If a person is not immediately brought to safety their internal organs will quickly liquefy. It can even be powerful enough at times to shatter forcefields and knock over buildings.

One of Behemoths ranged attacks is the ability to produce powerful shock-waves. He typically generates these by clapping his hands or claws together. They are powerful enough to knock over buildings and often come in quick succession. These also have a double purpose of being used to spread the radiation he produces over a further area.

One of his more basic abilities is to simply generate massive amounts of heat. Besides simply cooking opponents to death he can use it to superheat to temperatures capable of destroying airborne drones, guiding fires to vulnerable spots, and melting debris into balls of magma (which he can then throw).

One of his few defensive abilities besides simply tanking any shots thrown at him is to redirect the energy from the attack. With this he can move the energy from an attack into the ground around him or even use it to strengthen his own attacks. Notable uses include deflecting away all of Alexandria's punches and even channeling her attack's energy into his fist to smack her out of the air. However he can only do this when he knows an attack is coming.

Behemoth has attacked the most times out of any any Endbringer since he was the first. Almost all of his attacks result in massive casualties, earning him the name Herokiller. The average rate of death for heroes fighting him is, probably, more than one in four.[10] This is mostly due to his sheer durability and attacks that easily kill non-invincible heroes. Attacks include:

On December 13th, 1992 Behemoth, or Hadhayosh[4] as he was called, appeared for the first time to attack Marun, Iran's second largest oil field. However he appeared miles away from it rather than simply coming up directly underneath it. The Triumvirate were present at the time was caught off guard since their purpose for being there was only "earthquake relief." Several of the local heroes died almost immediately but the Triumvirate managed to put up a fight. Eidolon used laser and sand powers to fight Behemoth[11], before resorting to his matter deletion power to drive off the Endbringer.[12] On television, it was shown that Scion flew right past the fight to visit Kevin Norton.[13]

Although he was discussed before, Behemoth's first direct appearance in the plot was in Drone 23.5. He was detected as he emerged in New Delhi, India. All available heroes were rushed to the area on Dragon craft making for the highest attendance for any Endbringer battle to date. This included the Undersiders, Dragon and Defiant, Weaver, and even the Yangban. The Indian "hot" capes who attacked him first were quickly and ruthlessly killed. Nearly a dozen Dragon-craft attacked him with containment foam bombs, cryogenic beams, and devices that pulled the ground from beneath him. All of these ultimately failed and he took down several of the craft but drones managed to ionize the air to redirect the lightning. However he managed to free his lightning from this and he obliterated the drones with heated air. Afterwards he destroyed several more Dragon-craft.

As he moved on Behemoth used his lightning to light fires in areas that burn the fastest and cut off evacuation routes. This combined with the fact there was no advanced warning or evacuation meant the hundreds of thousands in the area were nearly helpless. Since only the ultra-durable capes could even get near him any other group of capes was forced to traverse the fire and smoke choked streets. Behemoth continued his rampage with shock-waves, lightning, fire, and even super-heating balls of debris into lava balls to hit further away areas.

Several staging areas were set up throughout the city along his predicted path, the largest one being in the field in front of India Gate. Behemoth continued along his trail of destruction, taking minimum damage despite constant barrages from Eidolon and Legend. His lightning was temporarily countered by Weaver's lightning rod but he quickly destroyed this. However "Alexandria" returned and engaged him. She got in a few good hits but he redirected most of her attacks into the ground. And because of Perdition's attack on the HQ he plowed through the defensive perimeters with ease.

Meanwhile it seemed Scion was going out of his way to avoid the battle. Behemoth managed to get close to the command center and slowly tore his way through the defending capes and forcefields with his roar and lightning. Tattletale eventually revealed that Behemoth, and all other Endbringers, were purposely holding back their attacks and letting the heroes win, meaning their full destructive potential had never been seen. Behemoth also had a goal in mind, which turned out to be an Indian cape Phir Sē who was created a massive ball of energy that took him three days to make.

Once Behemoth reached India Gate he was only delayed after he got pushed into wires frozen by Clockblocker. He eventually took out "Alexandria" by redirecting her own attack into his fist. Behemoth was then engaged by Weaver, Tecton's group, and the Undersiders. He zapped Regent to death after he used himself as a distraction to save Imp. Eventually Foil used her power on a chain, strung it between two of Rachel's dogs, and charged him, managing to cut one of Behemoth's legs off. Then the blast from Phir Sē came along and scraped off several layers of Behemoth.

It was then discovered that the outside appearance of him and all the Endbringers was vestigial and his powers worked as normal. He burrowed away and killed Phir Sē in his underground bunker. Then he moved on and attacked a temple where the wounded were being held, forcing the 70 or so remaining heroes to make a last stand. By the time he decided to retreat there was barely 40-50 heroes left and the area was doused in radiation.

However Scion arrived just as Behemoth retreated. He used his powers to slightly heal the heroes and remove the radiation then he raced after Behemoth as he burrowed underground. Scion pulled him back up to blast him with golden light then threw him into the ground. This repeated several times until he tore Behemoth in half. Behemoth tried to turn his remaining chunk into a super-massive bomb but Scion simply disintegrated him, making him the first Endbringer ever killed. 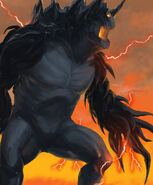 Image by AznPhailureGuy on DeviantArt

Image by Sulicius on DeviantArt 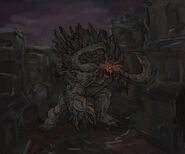 Image by Sulicius on DeviantArt

Image by acerbicCatharsis on DeviantArt 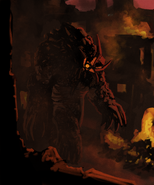 Image by cactusfantastico on DeviantArt 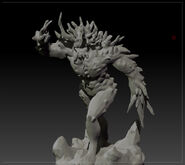 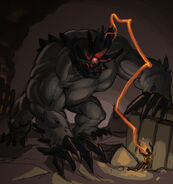 Image by Beru-bera on DeviantArt

Image by DamienDraidecht on DeviantArt 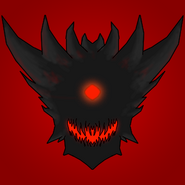 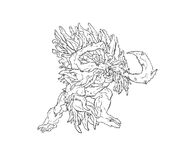 Retrieved from "https://worm.fandom.com/wiki/Behemoth?oldid=61171"
Community content is available under CC-BY-SA unless otherwise noted.