Bakuda is an explosive member of the Azn Bad Boys.

Bakuda is very arrogant, monologuing to the Undersiders about her status as a genius, and her ability to think "twelve moves ahead before you've even decided on your first". While she is implied to be highly intelligent due to possibly studying at Cornell University,[4] she displays a lack of common sense. Setting off a bomb to breed unpredictability is what allows the Undersiders to escape from her grasp, and her bombing campaign against Brockton Bay is what leads to the villain alliance against the ABB.[5] She takes having her intelligence questioned poorly—notably, snapping at and threatening Canary after she expressed doubt that Bakuda would be able to free herself from her restraints.[6] Tattletale opined that she was coddled and praised most of her life, and being harshly criticized at some point was what led her to trigger. Skitter speculates that it had something to do with struggling academically.

She acts theatrical, with exaggerated body language, and Skitter remarks that she likes to talk.[7] Bakuda also seems to enjoy taunting people, doing it to both Lung and the Undersiders on separate occasions.

Lung considers her someone who thinks in a similar manner to him, "in terms of power and fear".[8] She willingly served as a lieutenant to him and learned many lessons from him.

Her assault on Cornell was more then enough to put her on the Protectorates radar.

Her bombing campaign got her quickly sent to the Birdcage.

Bakuda is a young woman of half-Caucasian and half-Asian descent[9] with pale blue eyes and straight black hair.[10] While in costume, she wears large opaque goggles and a metal mask with a gas-mask filter and a braided cord of black, yellow, and green wires over her shoulders.[11]

When she does not have a filter on it, her speech has a notable Boston accent.[12]

Bakuda is a Tinker that specializes in bombs.[13] She was able to create bombs with an incredibly wide variety of effects, not all of them lethal.[14] Like many tinkers, she could gain increased versatility by studying the powers of other parahumans.[3][15]

She created a bomb as powerful as a nuclear weapon,[2] an estimated nine thousand kilotons,[16] and capable of creating an electromagnetic pulse that would cover a fifth of the United States from Brockton Bay[2] using household materials.[17] She had a strong connection to her shard.[3]

Bakuda's abilities were also useful outside a lab. She claimed to have an instinctive understanding of mechanisms and catalysts. She was able to take apart a tinker-designed collar without triggering its defense mechanisms, and rebuilding it into a bomb, using her mouth. She was able to analyse some of the Birdcage's defences, although she estimated it would take her a decade to fully unravel it. She created a device out of scrap that would punch through a Birdcage exterior wall, triggering the defences. She could fix broken televisions.[2] She claimed that she could literally perform surgery blindfolded.[18]

She didn't always know the effects of her bombs before she tested them.[15] She got bogged down testing and producing the same type of bomb over just creating as much as she could when she could.[1]

Bakuda was the daughter of a mixed race couple.[22] Given her accent, she likely was born or grew up around Boston.[12] Her father immigrated to the United States from Asia after Leviathan's attack on Kyushu.[23]

Bakuda triggered due to heavy stress after taking a large blow to her immense ego.[24] It is suggested she had received a less than perfect grade whilst studying at Cornell University. She then subsequently held the university ransom, placing several bombs in an academic building to destroy it,[3] as an act of revenge. Her tantrum was thwarted by the New York Protectorate,[25] and she was later recruited by Lung and joined the Azn Bad Boys.[26]

Bakuda hired Über and Leet to help her deal with the Undersiders. She initially observed the battle between the two groups, before making her appearance with a bow. Regent attempted to make her stumble, but she hung on the edge of the roof, chiding the Undersiders and telling them she was smart enough to learn from the mistakes of others. Giving the signal for her henchmen to come out, she proclaimed her status as the new leader of the Azn Bad Boys, and ordered her underlings to attack.[27]

Grue blanketed the area with darkness before the Undersiders retreated. After a brief chase, she caught up with the Undersiders after they found themselves confronted by her underlings, telling them she had put them in checkmate.[28] Tattletale accused her of toying with them, and Bakuda confirmed it. She ordered her men to open fire on the Undersiders if Tattletale opened her mouth, speculating on the nature of her power. She explained to the Undersiders that Lung had taught her much, but what she took to heart was his lesson about fear—that it was a blend of certainty and uncertainty. Bakuda proceeded to single out one of her minions, Park Jihoo, and asked him if he had ever held a gun.

Park Jihoo responded in the negative, and Bakuda told him that he was perfect for her demonstration. She ordered him to shoot one of the Undersiders, remarking that they were bad people if he was concerned about morals, and telling him he could shoot in a non-lethal spot. Stepping away, she then told another of her underlings to get out the camera and start rolling. Park Jihoo refused to shoot and dropped the gun, and Bakuda expressed disappointment that he was of no use to her as a soldier. Kicking him down, she activated the bomb in his head and liquified him. Then, she laughed.

Regent remarked that her display was "pretty cool", and Bakuda basked in the attention, telling him she had modelled it off Tesla's work in vibrations. Regent interrupted her to tell her that he didn't care, only that he thought a dissolved corpse was interesting, and asked how she'd done it. At Regent's inquiry, Bakuda confirmed that she had surgically inserted bombs into the brains of every one of the Azn Bad Boys. When Regent asked to get a better look, she told him no before saying that she knew what he was trying to do, and that she could think farther ahead than any of them.

Bakuda singled out another of her underlings, asking if she would shoot someone. The girl in question said that she could, all the while glancing at what was left of Park Jihoo, and Bakuda said that it concluded her demonstration. To show the unpredictability she was trying to cultivate, she set off a bomb in her own group, giving the Undersiders the opportunity to flee.[29]

Bakuda and several members of the ABB entered a chase with the Undersiders while in her Jeep. After nearly running over Grue, the driver bore down on the group, only for Regent to mess with the driver. The Jeep spun out, and Bakuda was flung from it. Getting up, she then fired another bomb at the Undersiders.[30]

Angry, Bakuda told the Undersiders that getting the upper hand on her was something they should be terrified of. Noticing Skitter was awake, she revealed she had spies in the Protectorate Headquarters who had told her about what Skitter had done to Lung, and told the other villain that she would get special treatment.

Trying to distract her from hurting Grue, Skitter taunted her about how she had failed at school, visibly shaking the bomber. Grue laughed at her, and Bakuda kicked Skitter in the face, intending to demonstrate one of her bombs on Grue in retaliation. She threatened to shove the bomb down Skitter's throat if he tried using his powers, and then slid it into his nasal cavity as she explained the bomb's effects. Struggling through searing pain, Skitter managed to bring her knife down on the edge of Bakuda's boot and cut off two of her toes. Incapacitated from the pain,[31] she fled and the Undersiders regrouped.

The bombing campaign that she started was more then enough of a distraction to allow Oni Lee to free Lung. While her forced recruitment tactics rapidly expanded the ABB's ranks, her manic phase eventually petered out and with Lung free she gave up her position as leader of the gang. She was eventually captured by the heroes of Brockton Bay with her city-destroying EMP bomb neutralized by Clockblocker and Vista.[32]

Bakuda was sentenced to the Birdcage for her crimes. She was placed in a transport vehicle alongside Lung and Paige Mcabee and had everything aside from her head and her shoulders covered in containment foam. After Paige woke up, Bakuda asked for her help in breaking free of the transport and, noticing Paige's hesitance, threatened to find her in prison if she refused. While working with the mask, Bakuda was asked by Paige why she was sentenced to the Birdcage, and Bakuda responded by saying she'd killed upwards of fifty people. She demanded Lung help her by heating the metal of the mask. Lung initially refused, but Bakuda goaded him to the point of anger and told him to use it to motivate himself.

Out of the now-heated metal, Bakuda created a makeshift screwdriver which she used to remove Paige's tranquilizing collar. Paige fell asleep, and when she awoke, Bakuda had created a tranquilizing bomb to use on the personnel transporting them. Bakuda told Paige that she would use her power to convince the men to free them, but when the bomb detonated, there was nobody there to hear Canary's song. As the three of them were taken into the Cage by giant metal claws, Bakuda screamed that she had had a plan.

Bakuda was set down alongside Paige and Lung in front of a monitor where a CGI rendering of Dragon's face appeared and addressed them. Dragon said that the proper procedures for Bakuda's transport hadn't been carried out, that she had a .000126% chance of escaping from the Birdcage, and then sent her off to be placed in Cell Block C.

Later, Bakuda was met by Lung in her cell. She told him of her time in the Birdcage, mentioning that things seemed grim for her until Glaistig Uaine discovered that she could repair the cell block's television. Bakuda expressed amazement at the layout and structure of the building, saying that she could spend her whole life trying to figure it out. Lung asked her if she had been in prison before, and explained to her the four ways a person could survive in prison; join one of the gangs, "be someone's bitch", kill someone, or be seen as a madman. Bakuda asked him which of the options he intended to take, and Lung told her he thought to choose the third and the fourth.

Realizing that Lung intended to kill her, Bakuda backed away before asking him why. He told her that she had failed him, in the city and the Cage, and insulted him. She threatened to punch a hole in the cell wall with an assortment of springs and wires, telling him they would both suffocate if he tried anything. Lung responded that she was not fast enough, and Bakuda asked him if he wanted to bet. He did.[2]

Her bombs were used against both Leviathan and the Slaughterhouse Nine with variable results. The Scar is the result of the latter bombing run.[20]

She saw the light of day again and created multiple tinker bombs to use against targets.

Was used to disable a dangerous tower.[35]

Illustration by wolfofragnarok on deviantArt

Image by aerryi on DeviantArt.

Image by tomgizz on Tumblr 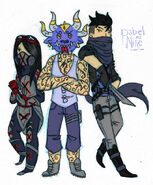 Retrieved from "https://worm.fandom.com/wiki/Bakuda?oldid=58712"
Community content is available under CC-BY-SA unless otherwise noted.