Atlas was a giant beetle created by Panacea to aid Skitter in her fight against the Slaughterhouse Nine. Skitter used Atlas primarily as a mode of aerial transportation and thought of it as a mindless automaton/pet.

Atlas has a Hercules beetle body plan scaled up. Roughly two meters long and one and half meters tall at the shoulder and wide, large enough for his master to ride. He is colored black excepting some white along the edges of the rugged carapace that holds his wings. His legs are splayed out longer then a beetle of equivalent size would be and he has two mantis like scythe limbs. His horn curves up like a regular beetles but ends up pointing downward.[1]

Atlas had the ability of mechanical flight, but could only handle a single full-grown person at a time. It was also durable enough to survive a ten to twelve foot crash without any noticeable damage. However, Skitter felt it was too fragile to survive any hostile actions while in air.[2]

Atlas' large scythe-like talons could also be used as a weapon. Though like his other legs, it was a hydraulic-based system that could not be utilized during flight and vice versa.[1]

As he was essentially a brainless extension of his Master he had no tactics of his own but he was instrumental in several. He was used like an attack drone on at least one occasion.[3]

After Panacea elaborated on her restrictions when it came to manipulating biology, Skitter asked Panacea if she could think of some other way to assist.

Convinced to help out in the fight against the Slaughterhouse 9, Panacea set out to create a form of transportation for Skitter upon overhearing Grue mentioning the lack of such.[2]

Atlas was formed from the mass of bugs Skitter sent to Panacea, who created him using a Hercules beetle as its base. Skitter immediately used Atlas for flight upon meeting it to escape Crawler and the imminent PRT bombing.[2]

Despite being based on a scaled up hercules beetle, Atlas had no instincts or any inherent knowledge of a beetle and required Skitter to fully manage its flight at all times. With trial and error (crashing once), Skitter managed to familiarize herself with its mechanics of flight to confidently fly it at a relatively high altitude away from the expected blast zone.

After Skitter returned from scouting the battlefield, Panacea modified Atlas once more to make it simpler to fly, by allowing it to repeat any previous action performed. This removed some of the focus Skitter required before, though she found it more irritating than helpful, as it may continue to fly without her should she be incapacitated. Panacea wanted to leave Atlas to starve to death but Grue used his new abilities to modify Atlas with a human digestive system.[4]

Atlas was then utilized to perform aerial bombings and strafing (with grenades and a revolver) to remove the cars atop a frozen Cache and Clockblocker as well as to fend off both Mannequin and Crawler. After Glory Girl had been seriously injured by Crawler, Skitter unsuccessfully attempted to carry the combined weight of herself and Glory Girl to be evacuated. Instead, using Glory Girl's own flight ability, Skitter used Atlas to lead her to Panacea.

When Skitter and Ballistic were sent in to deal with Parian, Skitter was captured by Parians friend Flechette. She brought in Atlas as a stop gap measure if she wasn't able to to convince Parian to leave Brockton Bay or join the Undersiders. Eventually, Atlas was spotted, alarming everyone present besides his master.[5]

The Undersiders' former benefactor made sure to remove Atlas from play when it came to betraying the team.

He was eventually found and returned to his master, just in time to join in the fight against Echidna, where Skitter had him land and use his scythe limbs to attack and to form flanking maneuvers with Weld.[6]

During a quiet moment thinking to herself Skitter noted the stress and tear that was accumulating on Atlas.[7]

Atlas eventually died when Skitter was incarcerated after turning herself in to the Protectorate, as it was unable to eat without Skitter's direct control. There were plans to turn him into a mold for a bronze statue, honoring everything the supposed villain did for the people of Brockton Bay and the Boardwalk.[8]

His master would eventually be given a flight pack to make up for the mobility Atlas had given her.[9]

The statue was eventually completed, it survived the end of the world though damaged.[10] 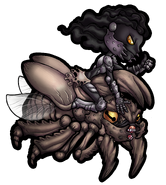 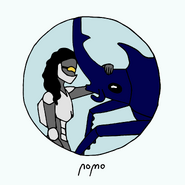 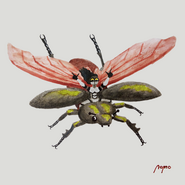 Illustration by pepecharlielepew
Add a photo to this gallery

Retrieved from "https://worm.fandom.com/wiki/Atlas?oldid=53595"
Community content is available under CC-BY-SA unless otherwise noted.