Heavens 12.none (Flashback)
Carlos, known publicly as Aegis, is a parahuman and a member of the Brockton Bay Wards.

Comfortable with his leadership role as head of the Brockton Bay Wards, the PRT intended to test this leadership by having him swap with Weld from Boston. Recognized as capable and intelligent by the criminal elements in the city.[2] Like all teenagers he had something to prove which would come back to bite him.[3]

Carlos is described as a young man of Puerto Rican descent who wore his hair long.[4]

He wears a rust-red costume with a matching helmet, both with silver-white trim, and a shield emblem.[5][6] His costume left some of his skin exposed and his eyes visible. During his first appearance, however, he switched costumes with Clockblocker as part of a plan to trick the Undersiders.[7]

Aegis possesses the ability of flight and an augmented physiology that operates at peak capacity as long as he is still living.[10][11][12][13][14][15]His entire biology is filled with so many redundancies and reinforcements that it makes it very difficult to put him down. For example: blinding him allows him to see by sensing light through his skin, cutting his throat bleeds no more than cutting the back of his hand, cutting off an arm would only last until he could get it reattached and stabbing him in the heart means that other organs would take its place.[12] Aegis could survive decapitation.[16][2]

During the Wards' confrontation of the Undersiders at the bank, Aegis survived being slammed into the ground hard enough to kill an ordinary person and stood back up after less than a second. Angelica held him in her mouth and whipped him around like a toy, but he kept fighting.[13] After Brutus and Angelica played a game of tug of war with his body, Kid Win hit them with a series of bolts from his Alternator Cannon, blasting the three of them into the opposite building.[17] It took the dogs some time to get up, but Aegis was in the air immediately. [14]

Aegis' augmented physiology allows him to abuse his body in ways that make him appear to possess supernatural strength. He can throw punches hard enough that they’d break his hand, mangle his joints and tear his muscles, and his body will take it. He can further enhance his strength by undergoing adrenaline rushes that he can keep going for hours. This has the further side effect of making it so that he never gets tired.[12] He was able to deliver a two-handed blow to Brutus' snout that knocked him over onto his side.[13]

In addition to his flight and augmented physiology, Aegis does not seem to feel pain, although his powers allow him to deal with the drawbacks. It is left unclear if Aegis truly possessed a congenital insensitivity to pain (CIP) or if he simply had an incredible ability to simply "deal" with the sensation.[18] Strictly speaking with his adaptive brute ability Aegis would be able to defeat Glory Girl.[19]

Carlos likely Triggered between two and three years ago at age fifteen,[1] and joined the Brockton Bay Wards team. Following Triumph's graduation into the Brockton Bay Protectorate, Aegis became the leader of the Wards.

During the battle at the Bank, Aegis led the Brockton Bay Wards to the bank after it was learned that the Undersiders were robbing it. He switched costumes with Clockblocker in an attempt to fool the Undersiders and have Clockblocker tag them, but this plan was foiled by Tattletale's power and he took a significant amount of damage from Hellhound's dogs.[20] He later volunteered to be the last person Panacea healed, while debriefing the Wards.

During the Collapse of the Empire Eighty-Eight Aegis appeared alongside New Wave's flyers, fighting against Purity, Rune, and Crusader.[21]

Director Piggot planned to restructure the Brockton Bay Protectorate and Wards teams, swapping Aegis with Weld. She and the PRT wanted to see how Aegis would handle leading a different team.[22]

Aegis spoke with a group of other Wards before Legend's speech[23] and tried to defend other capes by tanking attacks during the fight itself.[24]

When Leviathan was trapped, Aegis was assigned to an aerial route to prevent it from heading to the rooftops. He was killed when the Endbringer escaped.[25] His body was so completely and utterly smashed that his powers could not do a thing to prevent his death.[16] The damage was so absolute that no redundancy in his system could keep the resulting pulp alive, Clockblocker verified his death.[26]

Aegis' name was added to the Endbringer monument.[27] 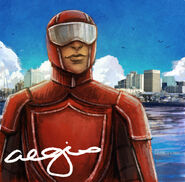 Image by Lonsheep on Deviantart