Accord is the leader of the Ambassadors and would be savior of mankind.

Accord's power affects his behavior. Specifically, it makes him hyper-aware to disorder and things that are "out of place", so much so that even minor details can drive him to homicidal rage, though he recognizes this in himself and does actively try to contain the urges his power gives where it would be inconvenient to act upon. However, if somebody were to offend him in some way, even for something as minor as accidentally urinating on a toilet seat, Accord would be willing to put a hit out on them.[2]

It is unknown how much of his original personality was subsumed by his power. Though it has left him with an appreciation of the dramatic flair.[3] He further diverts resources to maintaining his professional mastermind image.[4] He did not permit the use of any type of drugs in his presence or to his knowledge.[5] Keeping people from smoking and or drinking anything if he could.[6]

He believed that it was a waste of resources to participate in Endbringer battles.[7][4] In his defense, there was more than enough evidence of this from several decades of battles.

He desperately wanted to accomplish great things. To achieve these goals he was willing to go through large amounts of abuse.[8]

Were friends and work associates.

Were friends and collaborators.[9]

To the public at large Accord is a crime boss within the wealthier part of Boston. To people with an ear to cape business and politics, he is much more than that.[1] He provides plans and outlines for numerous groups and organizations to make sure things run smoothly.[10]

This and his violent attitude were known to the PRT.[11] His high and neigh unachievable standards serve as several switches that can cause him to turn on his allies.[12] Drawing Accord's ire has been compared to getting a Kill order.[13]

Accord is a short man. Barely standing over five feet[14][15] — and tends to dress more like a Businessman or mob boss than like a cape. The one concession he makes to his nature is an ornate handmade wood-and-silver mask, that goes with his tailored white suits and walking cane. The Mask is articulated so that people can tell what expressions he makes behind it.[15][16]

Accord is a Thinker whose intelligence supposedly increases in relation to the size and scope of the problems presented to him; therefore the greater the problem he's given, the faster he can devise a solution for it.[17] This applies to a wide range of applications.[16] From Accord's perspective, his Shard feeds him estimates and information with whatever task he set his mind to.[18]

As a test of his abilities, he devised a solution to world hunger using only a telephone and the internet in less than six and a half hours and in a further nine typed it up into a concise 150-page document outlining how to implement it.[19] His plans are often so complicated, however, that only Taylor Hebert and Cauldron seriously considered using them.[20]

Accord also has a minor sub-talent for creating objects with multiple interlocking parts and a sense of aesthetic harmony. He personally creates all the costumes and masks for each of the Ambassadors, even making the Travelers costumes. His own mask is made of multiple pieces that shift in response to his facial expressions. Similarly, he has created furniture that automatically adjusts itself to the user's weight and posture for maximum comfort, with apparently no electronics involved.[21] This is not a tinker talent however as these are essentially cleverly designed pieces using mundane materials and obeying normal physical laws without physical shard involvement.[22]

His plans have more direct utility. When he personally directs his ambassadors they 'always win'. Further, he can 'accordinate' plans to take out certain individuals.[13]Though his tactical ability in direct encounters is less usable.[17][9] Being able to create elaborate physical and social traps.[4]

Accord's walking cane contains a hidden folded blade. Given time many of his residences will have furniture specifically crafted by him.

Accord originally worked in WEDGDG,[23] an office handling economic oversight within the Parahuman Response Team. He took an afternoon off one day to solve world hunger and devised a plan that would solve it. He turned the sum of his work over to his employer who barely looked at it before demanding that he get back to work. He began siphoning and redistributing funds from his department but failed to account for the other Thinker that worked there. He was caught, imprisoned, and then broken out by a jailbreak specialist.[21]

Nobody that Accord contacted took up his ideas. Government after government failed to read the documents he sent them while no one raised the subject of his work to the United Nations or any major political body.[24]

Accord later decided that he would take the slow, steady path to victory. He amassed contacts, wealth, expanded upon his plans, and spent half an hour each morning to ensure that everything was up to date.[21] Cauldron sent him a friend to get him started.

Accord had come into contact with Cauldron. They provided him with Cauldron vials and a partner, Detente, with which he formed the Clockwork Dogs, and began to establish himself in Boston. The team arrived at the local villain moot and presented their plans for peaceful cooperation. It was not accepted fully.[25]

They continued working all over the city, trading territories, brokering alliances, and whittling down their weaker opponents.[26]

He settled into the Charleston area that he took good care of.[1] Four years on, the Clockwork Dogs are defunct and Detente is long gone. Based on Director Armstrong's suspicions, it is likely that he faked his own death or simply disappeared once Accord was firmly established.[27]

He had dealings with the Travelers, hiring them to attack Blasto's Lab. When Sundancer interrupted the initial meeting he claimed he would have to have the girl killed. Trickster was able to convince him otherwise by offering up the 'true' person responsible for the interruption.[28] After the Travelers supplied Accord with Perdition, things became much more equitable.

Before they moved to Brockton Bay, Accord outfitted the Travelers with their matching red and black costumes.[17]

In order to push out the newly arrived members of Fenrir's Chosen, Accord called a truce with Blasto; allegedly so that he could construct a powerful creature that would send the neo-nazis out of town, but actually as part of a plot to turn him in to the authorities. Accord's Ambassadors were attacked in the building they were stationed in before either plan could be completed, and the tinker was kidnapped by Bonesaw for her own ends.[29][30] As a consequence of the Slaughterhouse Nine coming to Boston, Accord lost all but two of his current Ambassadors.

Accord and his organization would travel to Brockton Bay where they came under the aegis of The Undersiders. Despite initial hardships, he succeeded in accepting the alliance.

As per the agreement with the Undersiders, Accord attended the endbringer fight in India.[31] Where he met his doom.

Accord was killed by Cody, a former member of the Travelers, who had been sold to the Yangban by Accord. Cody was the reason Accord's meeting with the Travelers had been interrupted when they visited Boston prior to the Travelers moving to Brockton Bay.[32] Cody also grievously wounded Chevalier and Tattletale.[33]

Accord's plans benefited the global populace well past his death. One of his most exemplary subordinates planned to use his designs to save everyone possible on Earth Bet.[34]

Image by adrius15 on Deviantart.

Image by Pabel and Nine on tumblr. 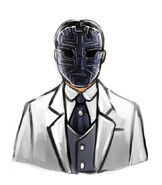 Image by Lonsheep
Add a photo to this gallery

Retrieved from "https://worm.fandom.com/wiki/Accord?oldid=56707"
Community content is available under CC-BY-SA unless otherwise noted.